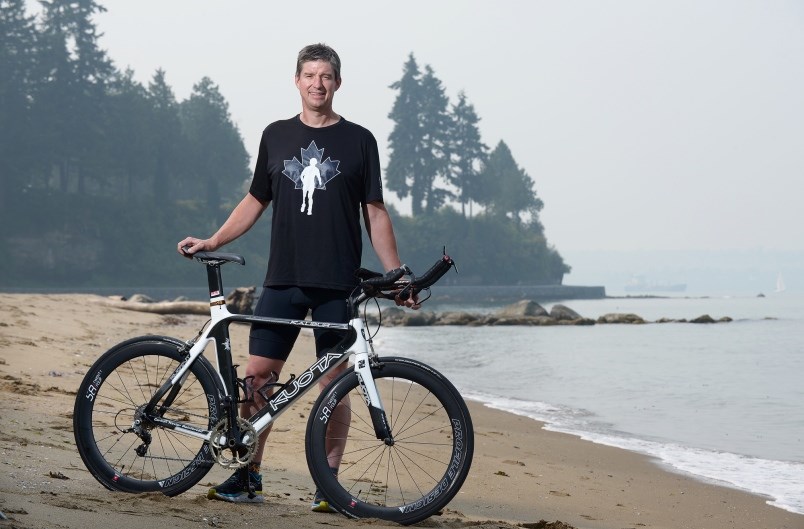 Chad Bentley, 45, is one of seven participants from around the world aiming to complete a triathlon on each of the Hawaiian Islands: Kauai, Oahu, Molokai, Maui and Kona, Aug. 28 to Sept 2, as part of the EPIC5 Challenge Hawaii. (via Jennifer Gauthier)

The first Canadian to attempt five Ironman races in five consecutive days once weighed 250 pounds and says he could easily drop $30 at the McDonald’s drive-thru in one go.

“I look at it as an adventure race,” Chad Bentley, 45, says of the EPIC5 Challenge Hawaii, where this year seven participants from around the world will complete a triathlon on each of the Hawaiian Islands: Kauai, Oahu, Molokai, Maui and Kona, Aug. 28 to Sept 2.

Swimming 12 miles, cycling 560 miles and running 132.5 miles in five days may not sound like an adventure to the average person, but Bentley’s never been average. He’s participated in multiple marathons, ultra-marathons and Iron Man races, as well as two Ultraman races and two Ultra520 races. (An ultramarathon is any footrace longer than the traditional the traditional marathon length of 42.195 kilometres, while an Ultraman is a three-day, 515 km multisport race.)

Even more impressive, Bentley only started running in 2005 when he and his wife moved from Yaletown to Abbotsford where there are plenty of trails to take their dog out running.

“I loved my alcohol and I smoked like a chimney,” says Bentley who’s been sober since 2007 and now clocks in at 212 pounds, which is still considered hefty in the world of Ironman.

Before leaving the city, Bentley knew his lifestyle wasn’t sustainable, especially when having kids came into the discussion.

Today, he says he loves to imagine all the people waking up with hangovers when he’s halfway through a training ride.

“I had just finished my first Iron Man that August, and Chad was really intrigued. He wouldn’t stop asking questions,” Ellery recalls.

Bentley was proud of completing his first marathon in 2005. But considering he had barely trained for a month, the race took a toll on his body, so he took a break from running. His idea of a break, however, was taking a month to hike the Himalayas. When he returned, he decided to train for a half Iron Man with a friend.

“Most people want to start with just a triathlon, but Chad was looking for a challenge — he didn’t waste any time,” says Ellery who was there to watch Bentley take on “Canada’s Toughest Half Iron” — a two-kilometre swim, 87-km bike and 21-km run in Osoyoos.

Ellery remembers the look on competitors’ faces when Bentley emerged from the water. Bentley had modest expectations for his first race and despite his larger build ended up being a naturally gifted swimming.

“Only two other pros came out of the water at the same time as Chad did, looking at him like, ‘Who is this guy who’s 75 pounds heavier than everyone else?’” Ellery laughs.

Bentley usually places in the top three when he races, but he says he’ll just be happy to complete the EPIC5, something he set his sights on a couple of years ago.

“You have to make sure you’re focusing on positive thoughts because there’ll be a shift in your body if you’re always negative — that’s how life works,” Bentley says.

He’s bringing a four-person crew with him to Hawaii, meaning he has to account for all of their travel, including rental cars, while at the same time planning ahead for nutrition management and inter-island travel with his gear and bike.

“I’d be happy if I could just get four or five hours of sleep a night, but I don’t think that’s realistic going into the last stretch,” Bentley says of his upcoming races. After intense activity for nine to 10 hours straight, he says his body will go into survival mode, making it difficult to sleep. On top of that, he’ll need to constantly consume whatever food his stomach can manage.

As painful as this may sound, Bentley loves that the extreme races require a special level of focus.

“You can’t look ahead, you can’t think about the finish line, you have to stay present,” Bentley says. “In a world where people are always thinking about something else and tied to technology, this is my meditation.”

The upcoming competition has another purpose, as Bentley will be fundraising for a different charity for each stage of the EPIC5.

“I wanted to do something bigger than just go out and do the race and cross the finish line,” Bentley says of his $25,000 fundraising goal.

Charities include Canuck Place Children’s Hospice; the Millipede Project, which aims to get 500 Vancouver-area children in need a new pair of back-to-school shoes; CNIB’s children and youth programs, for families dealing with vision loss; the Minerva Foundation’s Indigenous roots program, which supports leadership training for Indigenous girls; and the Terry Fox Foundation’s PROFYLE project, which gives children, adolescents and young adults who are out of conventional treatment options another chance to beat their cancer.

Donations for each race can be made on Bentley's website, which he recently created as a part of his endeavour to become a plant-based nutrition and life coach.

Bentley says after talking with his wife, he’s agreed to slow down once his Hawaiian adventure is over.

“My kids are still young, they enjoy coming to the finish lines and travelling to watch me, but I want to focus more on them,” says Bentley.

Ellery is confident that Bentley will not only be the first Canadian to complete EPIC5, but will also be the most fun person to watch while doing it.

“Just watching and seeing what he goes through on race weekends — the discomfort, fatigue — most people would throw in the towel. But Chad’s always upbeat,” Ellery says. “When his body is aching, fatigued, thirsty and everything is telling him he’s had enough, he’s still really friendly and fun to be around.”

Former Liberal Blair Lekstrom quits post as Premier Horgan's caribou liaison
Jan 24, 2020 4:42 PM
Comments
We welcome your feedback and encourage you to share your thoughts on this story. We ask that you be respectful of others and their points of view, refrain from personal attacks and stay on topic. To learn about our commenting policies and how we moderate, please read our Community Guidelines.