VIDEO: Enjoy this parody of Blackstreet’s “No Diggity” all about the Sedins

The unique playing style of Daniel and Henrik Sedin was so difficult to describe that it required the invention of an entirely new word: “Sedinery”
0
Feb 12, 2020 4:05 PM By: Daniel Wagner 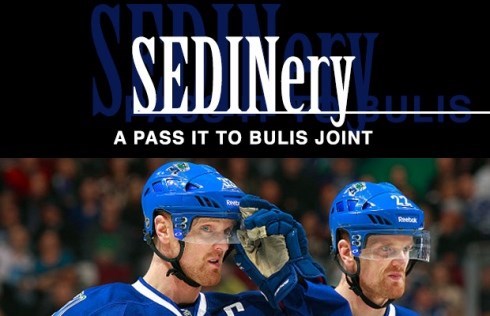 (via Pass it to Bulis/Vancouver is Awesome)

The unique playing style of Daniel and Henrik Sedin was so difficult to describe that it required the invention of an entirely new word: “Sedinery.”

Who came up with the word “Sedinery”? Pass it to Bulis coined the phrase “wizardous Sedinery” in the summer of 2010 as we ran out of real words to use while breaking down their amazing playmaking, though we originally spelled it “Sedinerie” because we’re fancy like that.

The word “Sedinery” was already in use prior to that, however. The earliest use we could find on the magical world of the internet was from Iain McIntyre, in an April 2010 article headlined “Kings’ Drew Doughty Quickly Learning Sedinery,” but McIntyre credited the word to Dave Tomlinson, who evidently had been using it on radio broadcasts months before McIntyre’s use of the word.

Tomlinson deserves the credit for coming up with the word “Sedinery,” but I like to think that the word would have eventually been invented spontaneously, simply because the Sedins are that good. When faced with the inexplicable, humans have to come up with something to capture it or their brains will break.

Heading into the 2015 playoffs, PITB co-creator Harrison Mooney and I wanted to write a new parody song as a tribute to the Sedins. A parody of Blackstreet’s “No Diggity” titled “Sedinery” was the obvious choice.

Unfortunately, the original video we shot for the song was lost in a purging of the Vancouver Sun online archives, so the song “Sedinery” has been missing from the internet for years. No longer. Here’s a new video for “Sedinery,” featuring some classic clips from the Sedins’ 18 years in Vancouver.

Because the song is from 2015, some of the references are a little bit dated. We sing about linemates Radim Vrbata, Alex Burrows, and Zack “Kassquatch” Kassian, for instance, but none of the anachronisms sting quite as much as the line in the second verse: “Maybe they’ll win Lord Stanley’s prize.”

Think of it this way: the Sedins may have retired from playing, but there’s every chance that they eventually return to the game in a coaching or management role and eventually win a Stanley Cup. I, for one, hope to one day see co-GMs Daniel and Henrik hoisting the Stanley Cup at centre ice at Rogers Arena.

Here are the lyrics:

[Daniel]
You know what? I like the Sedins
Sedinery, no doubt
Play on Henrik, play on Daniel
Yo H, drop the verse

[Harrison]
It’s going down, fade to royal blue and kelly green
These Swedish brothers got clout,
Cycle like Sedins, no doubt
They put it down, never slouch,
Making fans jump up off the couch
Passes make defencemen pass out
Tell me who could stop Sedins making moves
Tracking tallies like a blackboard
Giving goalies spasms with their passes to the backdoor
Still driving this engine, with the homies Vrbata and Burrows
The original Canuck heroes

[Daniel]
Shorty get down, good lord
Baby got ‘em singing Sweet Georgia Brown
Strictly biz, they don’t play around
Cover much ground, got game by the pound
Getting goals is a forte
Each and every day: Sedinery
I can’t get ‘em out of my mind
I think about Sedins all the time
Down low to the half-wall
In Montreal or anywhere at all
They got tricks in the sleeve
No one would believe
Quick little moves to deceive
By no means average
They’re on when they’ve got to have it
Sedins, you’re a perfect 10, perfect twin men
Put the twins on so we can win

[Harrison]
Twins like Siamese
With matching orange goatees
Swedish twins never displease
Bring defending teams down to both knees
Selfish hockey is a no
Let me tell you how it goes
Hank to Dank, Dank to Hank
Hank back to Dank back to Hank to the bank
Rolling with the Kassquatch
We call him that ‘cuz he looks like a Sasquatch
See the Sedin display
Call from Shorty, bang-bang, a perfect play
I like the way you work it
Top flight, all day, every day
Loving these guys, wizards on ice
Maybe they’ll win Lord Stanley’s prize

Forestry workers park rigs near B.C. legislature for pro-industry rally
Feb 18, 2020 4:24 PM
What people are saying about the B.C. budget
Feb 18, 2020 3:21 PM
Winners and losers in the 2020-21 British Columbia budget
Feb 18, 2020 2:53 PM
Comments
We welcome your feedback and encourage you to share your thoughts on this story. We ask that you be respectful of others and their points of view, refrain from personal attacks and stay on topic. To learn about our commenting policies and how we moderate, please read our Community Guidelines.

About the Author: Daniel Wagner

Daniel Wagner is the Editor of Pass it to Bulis, covering the Vancouver Canucks for Vancouver is Awesome.
Read more