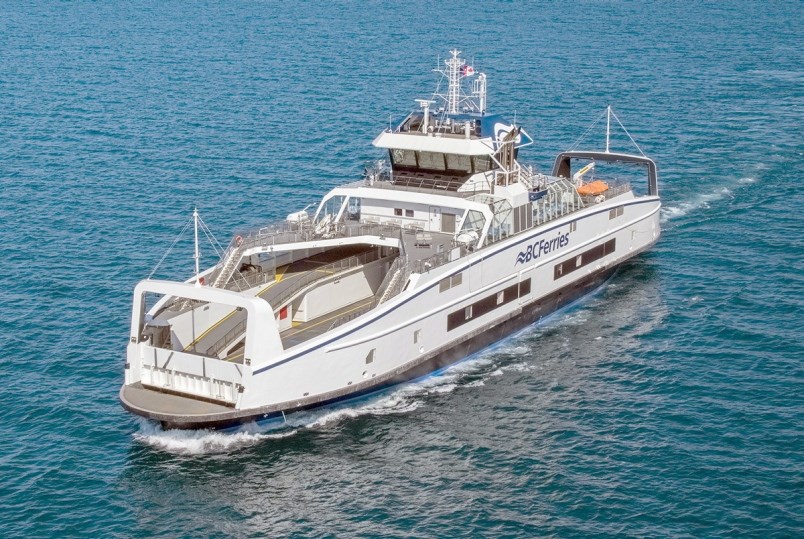 Saturday is the most likely day for arrival, said Tessa Humphries, spokesperson for B.C. Ferries.

The ferries are being transported by the Sun Rise heavy carrier. It has been slightly delayed because of poor weather.

“The ships will spend several days at Ogden Point while preparations are made to unload and deliver them to Point Hope Maritime,” Humphries said.

For this to happen, the Sun Rise, a semi-submersible transport ship, will partially submerge, she said.

The new ferries “will be floated off and manoeuvred by tugs to Point Hope Maritime,” Humphries said.

“Point Hope is recommissioning the ships, which includes various work before B.C. Ferries takes ownership of the vessels.”

B.C. Ferries plans to issue a notice when the vessels are moved to Ogden Point because of the public interest, she said.

The arrival of the Sun Rise will bring an end to its 10,305-nautical-mile trip to deliver the new vessels to B.C.

Built by Damen Shipyards Group in Romania, the Sun Rise left that country in late November, passing through the Panama Canal on its way here.

B.C. Ferries will take ownership of the ferries after final inspection at Point Hope Maritime.

They will be christened before B.C. Ferries moves on to crew training, ship familiarization and dock fits. The names have not been announced yet.

The Island Class ferries will be deployed on the Powell River-Texada Island and Port McNeill-Alert Bay-Sointula routes by mid year.