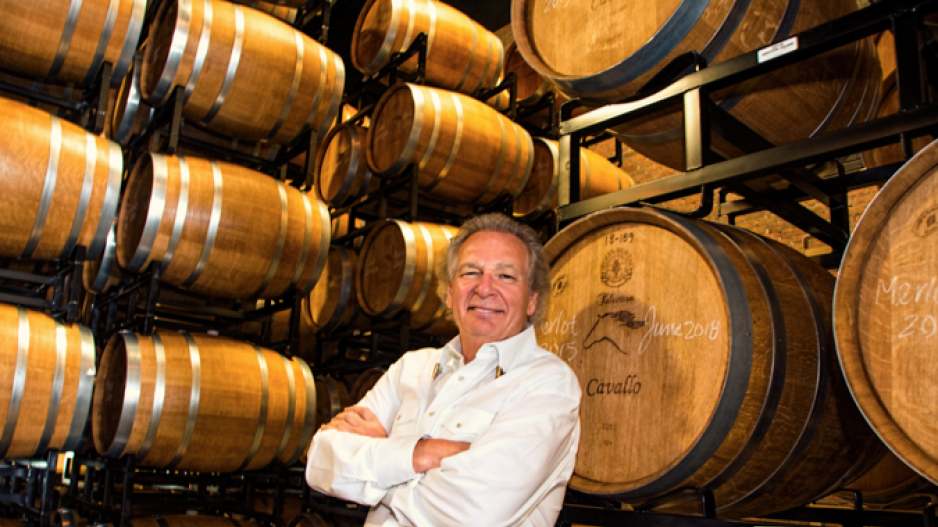 Experience in multiple industries can develop a well-rounded businessman, but in the case of Frank Gigliotti, president and CEO of Cavallo Winery Ltd., diversity of roles proved that, while experience is important, promotion is crucial.

Cavallo Winery was incorporated in 2014 and built its first commercial winery facility in 2015 in Langley. However, while the company is based in the province, it is an island unto itself within the Canadian wine market.

“We are positioning the winery as an international winery, which is quite different,” Gigliotti said. “Although we are domiciled in B.C., we are not making everything from B.C. products – we import our grapes from Napa Valley, our barrels come from France and America, our bottling line is Italian, our press is German.”

Gigliotti has nothing but respect for the local sector, but he and many industry professionals agree there is a sense that B.C. wine is not generally reviewed on the international scale. This is due, in part, to the difficulty of producing certain flavours with B.C.-grown fruit.

Heavy, deep fruit tastes like black cherry, blackberry, plum and other taste infusions like chocolate, he said, are hard to create with B.C. grapes. So the company is hoping to provide the market with something it might have been missing.

A product should be unique to appeal to consumers, Gigliotti said, but his experience has taught him that without the right strategy, even the best product can be overlooked.

“I spent many years in the entertainment business with Columbia Records, so I understand that promotion and marketing are just about everything. We didn’t necessarily promote our best singers. There were a lot of artists that didn’t get to where they should have gone based on their ability.”

Gigliotti’s work in the record business connected him with many vital allies in the media. In his other lives as a business consultant and as president of the BC Lions, Gigliotti developed the instinctual savvy that comes with owning a business.

“My ability to work with (Cavallo) and bring some insight as to how businesses operate and how they succeed and how they achieve accelerated growth is something I have been doing for a long time.”

While Gigliotti’s business history has given him diverse and extensive knowledge, his formal wine education is slender. He learned most of his winemaking skills by travelling to California and sourcing information from great winemakers.

Gigliotti added that his main focus is providing something new for consumers.

“Every day, the understanding of wines increases – everybody used to be happy with a $15 bottle of wine, and now they want a $30 bottle of wine and their palate has been educated substantially from a few years ago. From our standpoint, we are an ultra-premium winery; this is what we do.”

Gigliotti has his sights set on expansion into one of B.C.’s top tourist destinations. The company plans on opening a new operation in Whistler, along with increasing production and raising the brand’s profile.

“We think that we are going to have an accelerated growth potential, especially with Whistler and the amount of traffic that goes through there. We are going to be making around 12,500 cases this year ending 2018, then we are buying grapes for the 2018 vintage, which will be produced 2019.

Above all, Gigliotti said he really just wants to bring people together.

“I think my motto has always been ‘Good wine makes good friends.’ The reaction I get from people trying our wines and saying, ‘Wow, that’s very different’ … that instant gratification from the consumer is very confirming.”

N.L. Premier Dwight Ball to step down, says he will seek a 'more private life'
Feb 17, 2020 3:05 PM
Comments
We welcome your feedback and encourage you to share your thoughts on this story. We ask that you be respectful of others and their points of view, refrain from personal attacks and stay on topic. To learn about our commenting policies and how we moderate, please read our Community Guidelines.