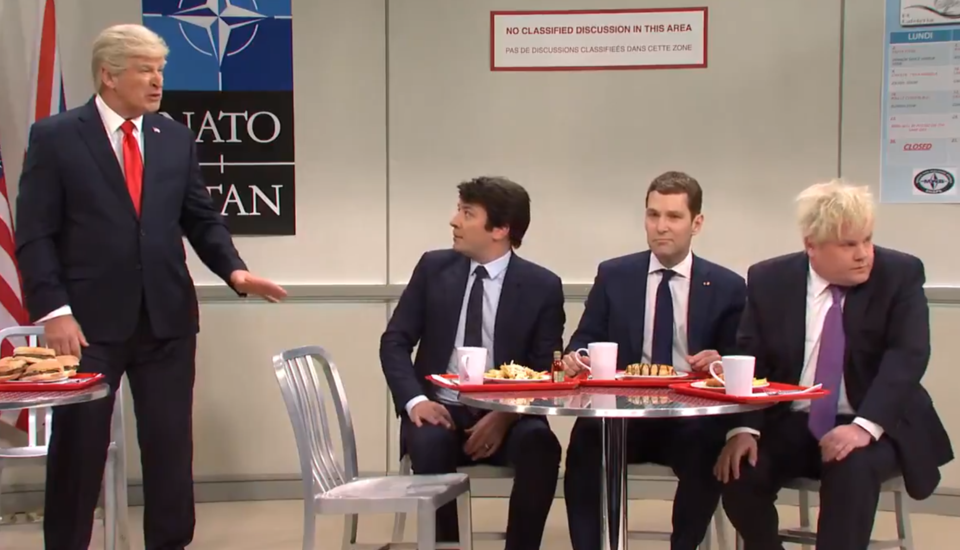 Jimmy Fallon as Trudeau, Paul Rudd as French President Emmanuel Macron, and James Corden as British Prime Minister Boris Johnson won't let Trump sit at their table in the skit and put a sign on his back saying, "IMPEACH ME!!!"

Nearly one week ago, Trudeau was seen standing in a huddle with Macron, Johnson, Dutch Prime Minister Mark Rutte and Britain's Princess Anne, daughter of Queen Elizabeth II, at a Buckingham Palace reception for leaders at the NATO summit, joking about Trump's long, impromptu press conferences.

"Some dismissed it as petty high school gossip," the SNL intro begins, "but you should have seen what happened in the NATO cafeteria."

The sketch pokes fun at Johnson's inclusion in the caught-on-video chat, given the British prime minister's generally closer relationship with Trump.

Rudd's Macron tells Baldwin's Trump that an empty seat had been promised to a friend, to which the Trump character replies that he is Johnson's friend.

"Don't make this harder than it already is," Corden says, looking away. "I'm hanging out with these guys now."

The sketch has the Trudeau character mocking Trump's appearance and intelligence, while the Macron character tells the others to wave to Trump at the other table, "so he thinks we like him."

"Those are my best friends," the Trump character says. "We run this place."

The Johnson character also makes a joke about Macron's wife being older, and the Trump character says, "That's good. I like when it's mean, but not about me."

The real Trump has seemed to shrug off the recording, calling Trudeau "two-faced," but also overall a good guy.

Later in the show, during the Weekend Update segment, they take one more dig at Trudeau, playing off of Trump's "two-faced" comment.

"It's true, I've definitely seen Trudeau with at least one other face," says host Colin Jost, while displaying a 2001 picture of Trudeau wearing brownface as part of an Aladdin costume that emerged during the fall election.

The NATO video also came to the attention of Democratic presidential candidate Joe Biden, who used it in an ad saying the world is laughing at Trump.