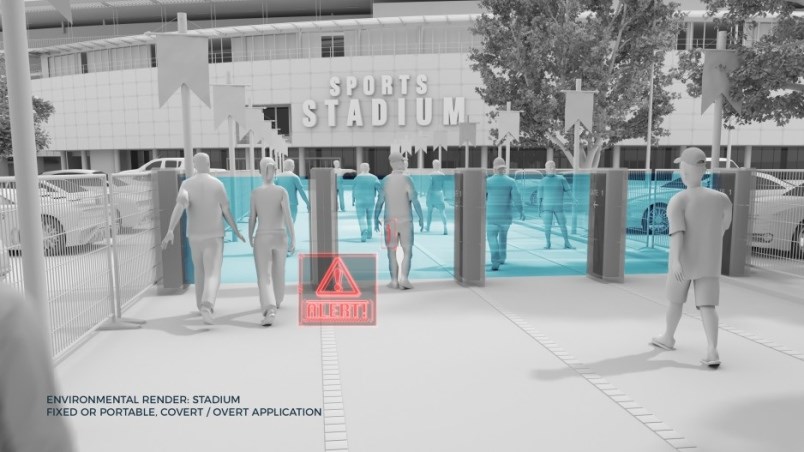 This illustration is a rendering of the Hexwave weapons-detection technology, which is expected to be tested at Vancouver's Rogers Arena in early 2020. (via Submitted)

What happened: Rogers Arena will test technology to better detect weapons on visitors.

Why it matters: Vendor says technology will be less intrusive than airport experience.

Rogers Arena is set to serve as a testing ground for technology aimed at detecting concealed weapons at high-traffic venues.

The technology, known as Hexwave, emits radio-frequency energy into a designated space that then reflects off a person’s body and creates a 3D image in real time of an item on that person.

The AI component then examines the 3D image to determine if it’s an innocuous item like a belt buckle, or a dangerous item like a handgun or a knife.

“Clearly we’re at an age or period of time now that people have accepted the [security] constraints in an aviation environment,” Liberty Defense CEO Bill Riker told Business in Vancouver.

“We are trying to take a similar level of security and apply it to our communities but not with the same amount of challenge with the experience.”

He said a prototype of the technology, which comes in the form of a panel that can be deployed either covertly or in the open, would be ready by the early summer.

Initial beta testing would begin in the late fall at select sites, while Riker said he expects testing to begin at Rogers Arena in early 2020.

These tests would be more akin to dry runs, featuring engineers and security personnel who would offer their feedback.

But Riker said the technology could be deployed for a live event during the testing phase if a venue agrees to it.

“We are committed to our customer safety and looking for ways to improve their experiences while visiting Rogers Arena,” Jim Day, Rogers Arena’s director of event operations and security, said in a statement.

“This includes exploring how using cutting edge technologies can help keep our fans and visitors safe. We look forward to evaluating the capabilities of the Hexwave product.”

Liberty Defense's partnership with Rogers Arena appears to be a natural fit, as Vancouver Canucks owner Francesco Aquilini serves as an adviser to the company.

Riker said he’d prefer not to comment on Sidoo but added, “We have officially parted ways.”

Police investigating altercation between transgender activist and reporter
Jan 24, 2020 11:05 AM
Comments
We welcome your feedback and encourage you to share your thoughts on this story. We ask that you be respectful of others and their points of view, refrain from personal attacks and stay on topic. To learn about our commenting policies and how we moderate, please read our Community Guidelines.