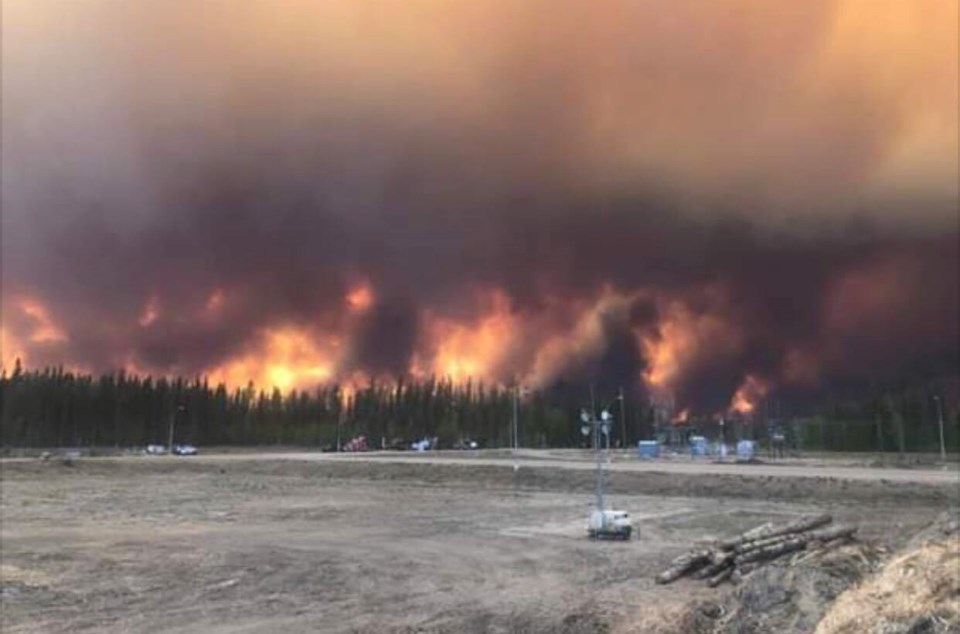 Fire officials say the winds continue to be favourable as crews battle a large wildfire burning a few kilometres from a northwestern Alberta town.

Nearly 5,000 people have cleared out of High Level and nearby First Nations with flames licking at the southern edge of the community, which is about 750 kilometres northwest of Edmonton.

Winds are forecast to be out of the southeast for the next several days, pushing the fire away from homes and other buildings.

"The fire is actually burning on the southwest side of High Level headed northwest," said Bruce Mayer, the assistant deputy minister of Alberta's Agriculture and Forestry Department.

"The forecast for the next few days is the strong gusty winds will be from the southeast to east and northeast, which are all favourable from a High Level perspective."

Alberta Premier Jason Kenney said the fire is about five kilometres from the town. Earlier estimates said flames were within three kilometres.

Kenney said no buildings have been damaged and the evacuation of the town on Monday went off without incident.

"I'm pleased to say it was a safe, orderly evacuation thanks to the co-operation of residents and first responders," Kenney said.

The fire is rated at a Level 6, the most intense rating on the scale. That means flames are jumping from treetop to treetop. The last estimate put the size of the blaze at 690 square kilometres.

Almost 90 firefighters are working on the edge of the fire closest to High Level, keeping the flames away from the town.

Kenney said more firefighters from Ontario, British Columbia and Nova Scotia are expected to be on the ground in Alberta in the next two days as part of national agreements to share firefighting resources.

"These resources are very much appreciated," he said. "We'd like to thank those governments and our fellow Canadians for coming to our assistance and we will certainly be proud to return the favour when needed in the future."

The premier urged residents to be cautious as the fire danger in many parts of the province is considered extreme.

"Unfortunately the dry conditions in northern Alberta are expected to continue for the foreseeable future with the fire danger possibly increasing this week."

Vancouver Canucks trade for goaltender Louis Domingue as injury concerns surface for Jacob Markstrom
Feb 24, 2020 2:05 PM
Comments
We welcome your feedback and encourage you to share your thoughts on this story. We ask that you be respectful of others and their points of view, refrain from personal attacks and stay on topic. To learn about our commenting policies and how we moderate, please read our Community Guidelines.