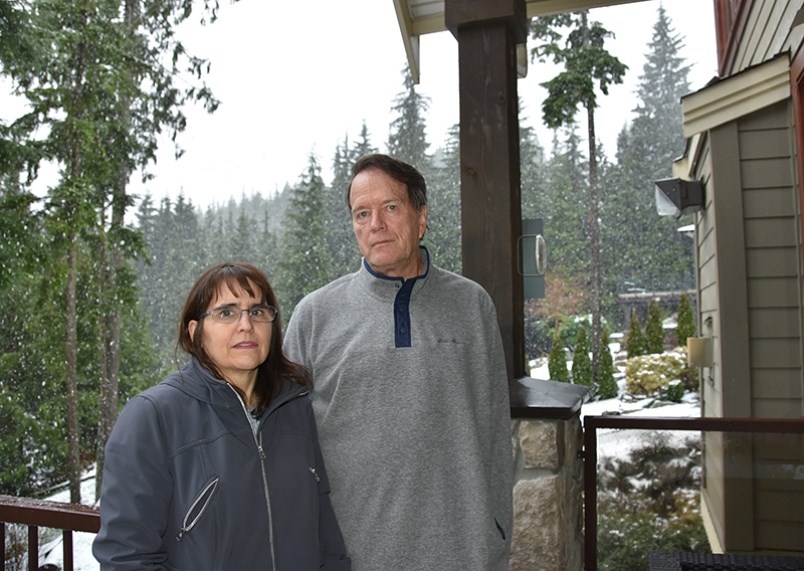 Anmore residents Mike and Corrine Robson helped rescue an underweight black bear cub that had taken refuge in the corner of a neighbour’s patio for 16 hours. With the assistance of The Fur-Bearers the cub was taken to Critter Care in Langley where it is being looked after. (via Diane Strandberg)

An Anmore couple is feeling confident they did the right thing in helping to bring a malnourished bear cub to a wildlife rehabilitation centre.

And news that they are being investigated doesn’t worry them.

Mike and Corrine Robson say they are sleeping soundly at night knowing the tiny cub is being looked after at Critter Care Wildlife Society, a rehabilitation centre in Langley.

Had they let conservation officers release the bear into the woods, as they were told would happen, the bruin would likely have died, they say.

Still, the BC Conservation Officer Service maintains the cub should have been allowed to reconnect with its mother, if it's around, because early intervention by humans can lead to “habituation” and the separation of a family unit.

The Robsons said they believe the tiny bruin is more likely to survive now that it’s in a safe place.

“It would have died (if it was relocated) in the woods,” Corrine said.

The situation started with an urgent text from a neighbour concerned about a tiny cub that had holed up in a corner of a patio behind some plastic packing material. No female bear was in the vicinity and in a video taken by the couple, the bear looks undersized and exhausted.

“I knew it was going to go below zero that night. This is a baby by itself in January, it’s not going to survive,” Corrine said.

She called Critter Care, which promised a place for the tiny bruin, but also said she must first call the BC Conservation Officer Service for assistance.

That’s when the couple met with some resistance.

"They said they weren’t going to get involved,” Corrine said.

Told to call back in the morning, the couple said they weren’t given any certainty that anyone would check on the bear. Frustrated and uncertain as to what to do, they turned to Facebook for help.

The next morning, a volunteer from the animal advocacy group The Fur-Bearers showed up and drove the cub to Critter Care with Mike assisting. And when told the cub was only 20 lb. — roughly 60 lb. underweight — he said he was relieved the cub would get some care.

It wasn’t until he returned to his home, that he learned he might be in trouble.

Conservation officers told him they would be investigating and that cubs are typically left for 24 hours to see if a mother shows up.

“They read me my rights,” he said, adding that he was asked to provide identification.

In an email to The Tri-City News, the BC Conservation Officer Service provided the following statement:

"It is important to allow wildlife to remain in their family unit and in their natural environment if possible. Early human intervention could potentially lead to habituation or the separation of a family unit of bears.

"The COS is looking into the circumstances surrounding this incident.”

But the Robsons said the COs weren’t doing their job when they refused to come out that night and their plan of action would have put the animal at risk.

A spokesperson from The Fur-Bearers Society agrees.

“They were just trying to do the right thing,” said Michael Howie.

At the very least, the officer should have showed up to assess the health of the animal, he said.

“Residents should not fear a government agency when they want to help an orphaned, native animal. Residents should not be in a place to assume that asking for this kind of help will result in the death of an innocent animal or that they will be punished for doing what is right when told no options are available,” the group’s statement says.

Howie reiterated his concerns about a potential investigation of the family who sought help for the bear cub.

“If there’s going to be an investigation, it should be who was on the other end of the phone. The family did what they should have done.”

A spokesperson from Critter Care said the cub is “stable for the moment,” but said she wasn’t sure whether it would survive.

Read more from the Tri-City News