If you've gone past the Paramount Theatre this week, you might have noticed some new paint going up on the walls.

So far it's just the outlines — sketches of five different panels along Fifth Avenue.

But local mural artist Zach Abney is well on his way to creating the largest mural in Kamloops, along with assistant Nancy Kuchta, all based on films shown at the theatre.

The mural is part of the Kamloops Central Business Improvement Association's back alley gallery, even though most of it won't be in an alley.

"This one is a little bit different since it faces the street," Abney tells KamloopsMatters. "It actually wraps all the way around the building; it goes right down the alleyway and then there's one more little panel around the back there too." 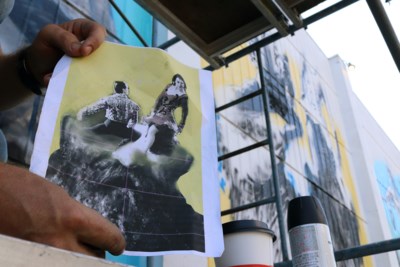 Strictly Ballroom. (via Brendan Kergin)
In total, there will be seven panels with scenes from seven films. Five will be on the main wall, with scenes emerging from heads: Cinema Paradiso, Strictly Ballroom, Raging Bull, Seven Brides for Seven Brothers and The Sweet Hereafter will adorn the main wall. On the large back wall, the recently released Canadian film The Grizzlies will get a large area, while Taika Waititi's What We Do In The Shadows will be tucked away on the last section.

"This mural, I really wanted it to have a little bit of design language," Abney says. "The whole idea is that it's people that are remembering scenes from films that they've watched that the Kamloops Film Society had put on."

While Abney came up with the designs, which he's sketched out digitally, he had to get approval from different groups, including the Kamloops Arts Council and Kamloops Film Society.

It's not Abney's first mural in Kamloops. Last year he painted a jazz saxophonist behind a building off Fourth Avenue. He also is a painter of more usual sized pieces, working in acrylics out of a studio downtown (when he's not working his other job replacing railways for CP).

Abney and Kuchta started the mural earlier this week, so things are still in the early stages. It'll take about eight weeks to finish, according to the pair.

PHOTOS: There's some pretty rad street art in downtown Kamloops
May 15, 2018 1:05 PM
Comments
We welcome your feedback and encourage you to share your thoughts on this story. We ask that you be respectful of others and their points of view, refrain from personal attacks and stay on topic. To learn about our commenting policies and how we moderate, please read our Community Guidelines.