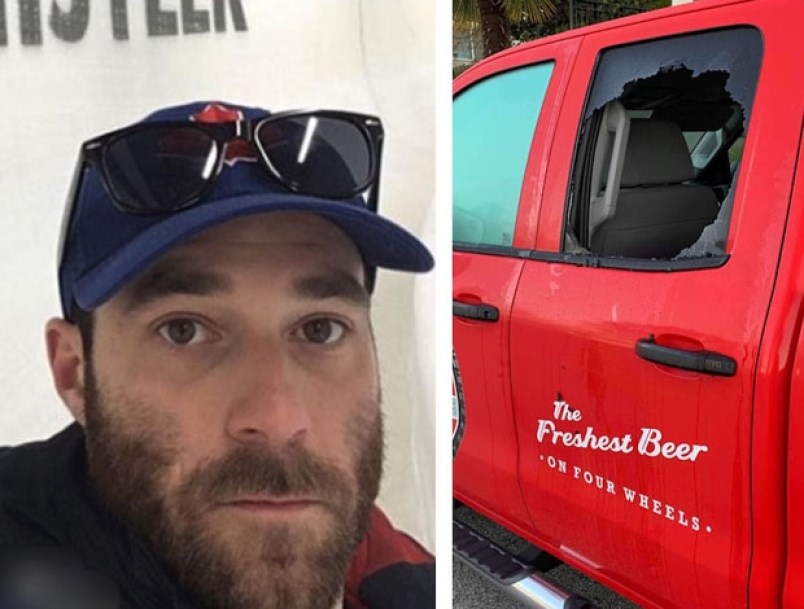 Canadian Development Team member Taylor Purdy had his truck broken into overnight on Tuesday while it was parked outside a friend’s place on Beach Avenue in Vancouver. (via Facebook/Taylor Purdy)

The Canadian Development Team member had his truck broken into overnight on Tuesday (Nov. 5) while it was parked outside a friend’s place on Beach Avenue in Vancouver.

The Calgary resident was spending the night there on his way back home after a week of training at the Whistler Sliding Centre.

Stolen was his duffel bag that contained his helmet, skeleton shoes, a race suit, two Team Canada jackets, snow pants, tools and some sentimental items from his time as a volunteer in Vancouver for the 2010 Winter Games.

“I woke up to this gorgeous view that so good I actually took a photo only to soon discover my truck,” said Purdy, now back home in Calgary. “It happened right outside my bedroom window but I didn’t hear anything and my car alarm, for whatever reason, didn’t go off either. They smashed hole large enough for my duffel bag to fit through it.”

Purdy was driving his employer’s Red Truck Beer vehicle which might explain the attraction of thieves but the work colleague where he stayed that night drives the exact same truck.

Now he is hoping some of his stolen items might turn up somewhere, especially his 2010 Vancouver Winter Olympic Games mementos.

“It was during my time in Whistler that I discovered my passion for the sport so they mean a lot to me and it’s obviously something I can’t replace now.

“My employer has been wonderful dealing with the truck and so has my community, the people I train with on a regular basis. There is just some stuff like my helmet, shoes and training suits I would like to have back too.”

VIDEO: Deer stuck in lake saved by ice rescue crews
Jan 18, 2020 4:08 PM
Comments
We welcome your feedback and encourage you to share your thoughts on this story. We ask that you be respectful of others and their points of view, refrain from personal attacks and stay on topic. To learn about our commenting policies and how we moderate, please read our Community Guidelines.