Dad's invention for disabled daughter gets recognition at national contest 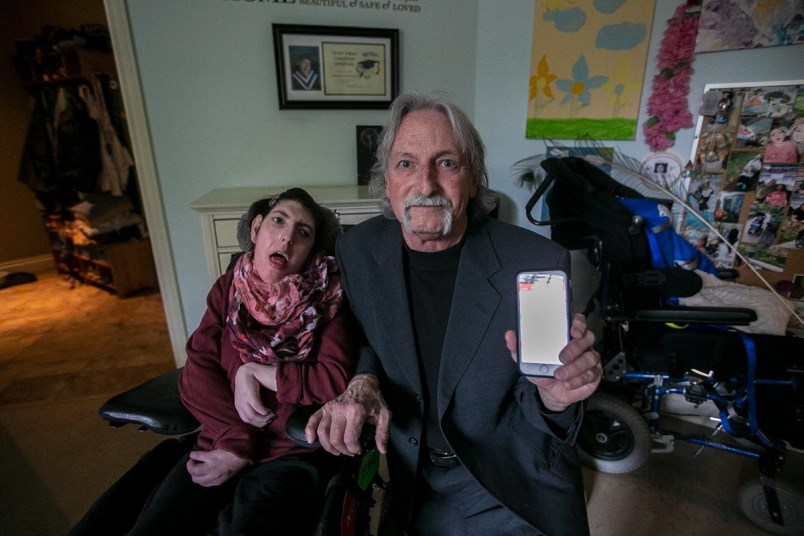 Jim McDermott has developed a device that makes care for his daughter, Mariel, significantly easier. (via Darren Stone/Times Colonist)

A device developed by a Saanich father to keep his disabled daughter’s diaper dry has taken second prize in a Canadian national contest.

The CareChanger, a sensory device that monitors for moisture and alerts caregivers to the need for a diaper change, took second place in its category at Innovative Design for Accessibility, a competition of Universities Canada, an organization that includes the University of Victoria.

Jim McDermott said he is meeting with a technology and design firm to discuss taking the device further, possibly to market.

“It might be a little easier now that I actually have an award-winning device to sell,” said McDermott, a retired maintenance engineer.

His daughter, Mariel McDermott, was born with cerebral palsy. She is quadriplegic and developmentally delayed, and uses a wheelchair. At 23, her needs are similar to an infant’s.

McDermott said his daughter has been well looked after in care facilities. But her diapers were changed according to caregivers’ schedules, not hers. As a result, she regularly developed urinary infections and skin breakouts.

He developed the original device with a wireless sensor tag used to monitor humidity in wine cellars and linked it to a computer tablet slung on the back of Mariel’s wheelchair and to his own phone.

Caregivers could tell by glancing at the computer tablet if Mariel needed a change, and he could look at his phone.

McDermott said the best proof of the CareChanger’s effectiveness is Mariel’s subsequent medical record: free of all related infections since the device went into use over two years ago.

But to turn his innovation into a standalone device, McDermott needed help. He approached UVic, where he was introduced to the Biomedical Engineering Design Club, formed by 11 engineering students.

It was the students who took the device to competition and won the award.

“They all worked really hard on this,” McDermott said. “They have been going at it since January.”'