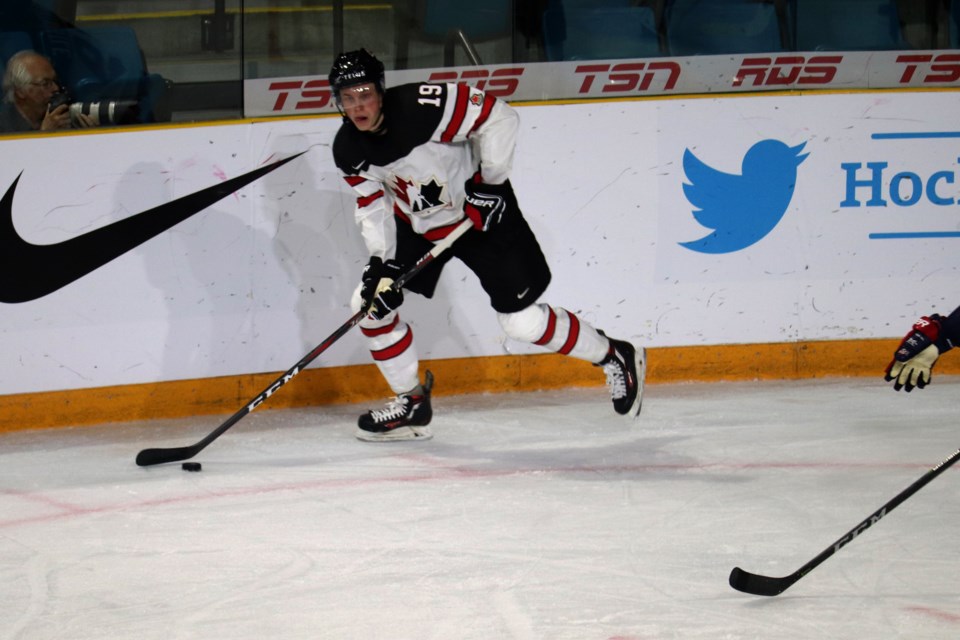 MacKenzie Entwistle looks for a pass during a game on Tuesday. (via Eric Thompson)

It looked like luck just wasn't going to be on Michael DiPietro's side this week.

Following a game where the Canucks prospect was shelled for five goals, he entered last night's scoreless game against Sweden halfway through, looking to rebound.

But just 16 seconds after Jared McIsaac gave Canada a 1-0 lead, a Marcus Sylvegard shot took weird bounce – maybe off his teammates skate, maybe off Markus Phillips stick, perhaps both – and arced over his head into the net to tie the game at one.

DiPietro shook off that unlucky goal and was spotless from there on out, making 18 crucial saves to help Team Canada to a 4-1 win.

Alex Formenton spotted the Canadians another lead with minimal time left in the second period, streaking down the left side and burying a shot in the top right corner behind Swedish goalie Olle Eriksson Ek.

Early in the third, MacKenzie Entwistle gave Canada a 3-1 lead, the exact same lead they blew the previous night against Finland.

“To take that lead was really important, but I think to finish it out in the third was our main goal,” said Formenton.

Joel Teasdale iced the game with an empty-netter, a nice end to the night for him after he missed a pair of glorious chances to score earlier in the game.

One of the final cuts for last year's junior team, DiPietro is a favourite to make the squad this time around. He was even invited to be the third goalie for Team Canada at the IIHF World Hockey Championship this year. An effort like last night showed what he's capable of when he's on; helping Canada hold the Swedish powerplay to 0-for-5 on the night.

Matthew Villalta stopped all eight shots he faced in the first half of the game. He'll get one last chance to make his case, along with goalie Matthew Welsh, in Team Canada's final game this afternoon, starting at 2 p.m. at the Sandman Centre.