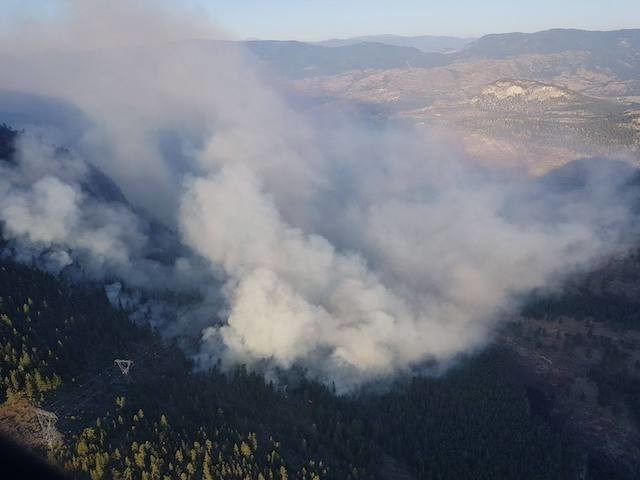 Planned ignitions on the Eagle Bluff wildfire Thursday have brought the total area burned to an estimated 2,270 hectares, up from 1,500 earlier today (Aug. 8).

The controlled burns were conducted on the south of the large wildfire.

Additional firefighters were also assigned to the blaze, with 180 on scene Thursday. Twenty B.C. Wildfire Service firefighters will remain at the fire through the evening.

During the night, the BCWS will be using night-vision from helicopters to support ground crews, help detect new fires, and more accurately map the fire perimeter due to decreased smoke at night.

“The B.C. Wildfire Service is trialling night vision technology to explore the capabilities of night flying for reconnaissance and detection and to allow for continued situational awareness,” the BCWS said in an update posted to social media.

The workday is far from over for B.C. wildfire crews fighting the Eagle Bluff wildfire.

As the mercury hits its peak at 37 C, 124 firefighters remain in the field battling the 1,500-hectare blaze supported by over a dozen helicopters.

She was not able to say if planned hand ignitions for the Mud Lake area went ahead as planned.

A new fire camp is being assembled at the Oliver airport, shifting resources from Penticton closer to the fire. Structural protection crews from across the region have also been called in.

With less than a minute between them, a steady stream of helicopters with the B.C. Wildfire Service fill their buckets in Vaseux Lake, rushing back to the growing Eagle Bluff wildfire north of Oliver.

The blaze has now scorched an estimated 1,500 hectares of forest and resulted in evacuation alerts being issued to around 250 properties.

Thirteen helicopters are supporting 124 ground firefighters, who are struggling with cliff faces and mountainous terrain.

“Some of those topographical features are posing a little bit of a challenge and they are making some of the sections of the fire relatively unsafe for ground crews and heavy equipment,” says fire information officer Nicole Bonnett, adding the recent growth of the fire has actually allowed them better access to it.

Bonnett says they are being deployed as a precautionary measure should winds pick up.

“There are some forecasted winds that we are anticipating, so we are just getting those teams into place should those winds come about and something happens."

Weather permitting, a hand ignition will take place in the Mud Lake area to remove fuel from the fire’s path. This follows up on a successful burn on Wednesday.

It’s expected the fire will continue to grow over the next couple of days. A new, more accurate, size estimate should be released later Thursday (Aug. 8).

The sweltering heat will hopefully be broken by rain in the forecast this weekend, although it would have to be significant to make a difference at this point, says Bonnett.

Motorists are being asked to avoid stopping on Highway 97 through the fire zone.

The B.C. Wildfire Service is in the process of moving its operations from the Penticton fire base to one being constructed today in Oliver.

“The planned ignitions that we did yesterday afternoon went really successfully so today if the conditions are favourable we will be doing another small scale land ignition” in the Mud Lake area, she says.

The fire is currently moving south, south-east — barring any major shift in wind.

The #EagleBluff wildfire (K51244) experienced some growth partially due to successful small scale ignitions. Additional resources, including Structure Protection, will be stationed throughout communities as a precaution. For more info, visit: https://t.co/lcp78UXToS #BCWildfire

There are 100 firefighters and 13 helicopters assigned to the fire today, along with tankers and skimmers when possible.

Bonnett says they are hoping rain in the forecast this weekend comes through, but it will have to be significant to make a dent.

“We are hoping that ends up happening, but with a fire this size, if it's a short rain event and not a significant amount of precipitation, it’s not going to have any long term impact on the fire.”

On Wednesday evening, the evacuation alert area surrounding the fire was expanding to 41 additional properties.

This story will be updated throughout the day.

PHOTOS: Feathered evacuees making Kamloops their home until fire dies down
Aug 7, 2019 11:30 AM
Comments
We welcome your feedback and encourage you to share your thoughts on this story. We ask that you be respectful of others and their points of view, refrain from personal attacks and stay on topic. To learn about our commenting policies and how we moderate, please read our Community Guidelines.