UPDATE: It appears those five puppies do have an owner 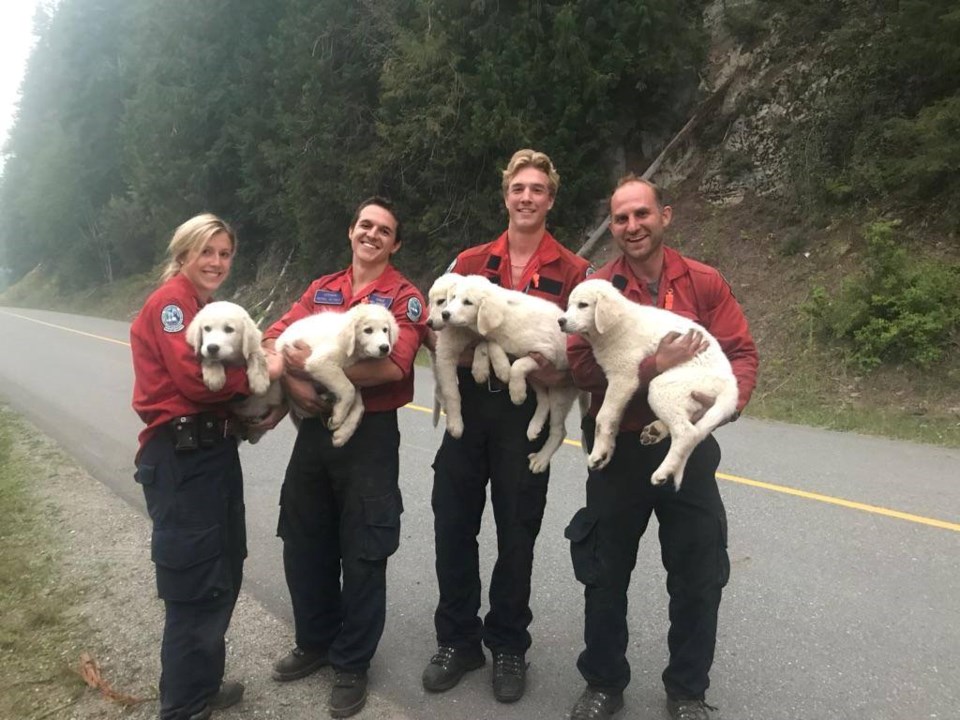 According to a post on Kijiji, the five puppies reportedly belong to Cedarstein Farm in Lumby.

KamloopsMatters found the listing and contacted owner Heidi Lang to inquire about the missing dogs.

She says they are hers and she's been looking for them for the last two days. The dogs are Maremma guardian dogs, used as farm dogs or for acreages to keep predators away.

Lang claims the firefighters took the dogs away despite being told by her husband, who was allegedly there at the time, that they "let them go back to the mother."

None of the crew members involved in the incident were available for comment (they were back on the frontlines on Monday).

However, Shelley Zupp, a fire information officer with the Kamloops Fire Centre, said the following in an email to KamloopsMatters: "We are confident that the firefighter who rescued the dogs did so out of concern and nothing more. They are being well cared for and once the puppies are handed over to the SPCA, they will decide what is best moving forward."

KamloopsMatters was told by Zupp that the puppies will be taken to the Vernon SPCA. The shelter, however, is closed on Mondays and could not be reached for an interview.

Their day went from fighting flames to finding fluffy friends.

A crew of firefighters battling the Mabel Creek fire complex west of Mabel Lake and the Shuswap were driving back after a day on the frontlines when they came across five puppies, says provincial fire information officer Kyla Fraser.

"When the fire crew found the puppies they contacted the RCMP and were advised to bring them back," she says.

Where the puppies came from is a mystery. RCMP weren't aware of any properties they could have come from, Fraser says, as the area they were found in is remote with no nearby properties that would house the five young dogs. They also have no tags or collars on them.

Fraser says the SPCA has been contacted, but the dogs haven't been handed over to the agency yet. In the meantime, the firefighters have organized care for the dogs.

"They have the dogs in their care right now," Fraser says. "I think someone's parent is actually looking after them right now."