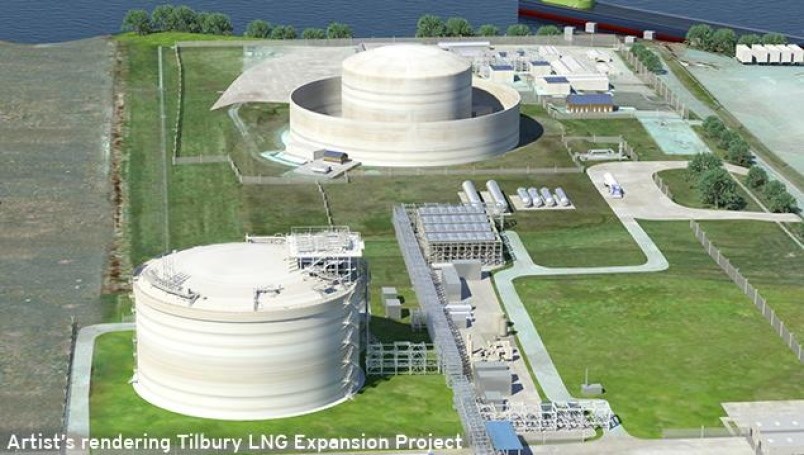 An artist's rendering of the Tilbury LNG Expansion Project. (via FortisBC)

FortisBC announced Tuesday (July 16) that it has entered into its first term supply agreement to produce liquefied natural gas (LNG) for Top Speed Energy Corp. to export to China.

This term supply agreement was made possible by the completion of the Tilbury LNG expansion project in Delta earlier this year.

The two-year agreement will see 53,000 tonnes of LNG a year or about 60 ISO containers (standard-sized shipping containers) a week shipped from Tilbury to China by the summer of 2021. The volume of LNG to be exported is equivalent to the volume necessary to heat more than 30,000 average B.C. households for a year.

“This is the first agreement of its kind that will see Canadian LNG shipped regularly to China,” said FortisBC vice-president of market development and external relations, Douglas Stout in a news release. “There is strong demand for Canadian LNG in China and this is an exciting time to be working in the industry here in B.C.”

In 2017, FortisBC became the first company in Canada to supply LNG for export to China. Since then FortisBC has been supplying LNG to customers for export to China on a spot basis. With the expansion project adding LNG production capacity of 250,000 tonnes per year and additional storage capacity of 46,000 cubic metres, Tilbury is leading Canada’s export industry into uncharted territory.

Tilbury’s new expansion facility is designed to be one of the cleanest LNG facilities in the world. This agreement would reduce between 90,000 and 180,000 tonnes of GHG emissions annually, according to a lifecycle greenhouse gas (GHG) emissions tool developed specifically for Tilbury. This is the GHG emissions equivalent of removing every passenger-sized diesel truck in B.C. LNG plays an important role for Canada both as an attainable way to reduce GHG emissions, and as an economic opportunity.

“The announcement of an LNG contract at Tilbury is an encouraging step for Canada’s LNG export industry,” said Amarjeet Sohi, Minister of Natural Resources. “We are using sustainable Canadian fuels to reduce worldwide carbon emissions, and the opportunities to strengthen Canada’s economy and create good jobs continue to grow.”

Chinese industries and residential buildings are switching from coal to natural gas to significantly improve air quality and address climate change. According to the International Energy Agency, LNG imports will be critical to transition China’s energy system to a path that limits global warming. Shipping LNG by ISO container helps meet the energy demands of industrial and public utility customers in China who are not connected to a pipeline network as the containers can be transported virtually anywhere and don’t require large regasification terminals to convert the LNG back into natural gas.

“Canada is one of the leading natural gas producers in the world and our company is pleased to work with FortisBC to move their LNG to China’s fast-growing market,” said Top Speed Energy CEO Chen Jianrong. “The market for Canadian LNG will increase as China seeks to reduce air pollution and carbon emissions by switching to lower-carbon energy.”