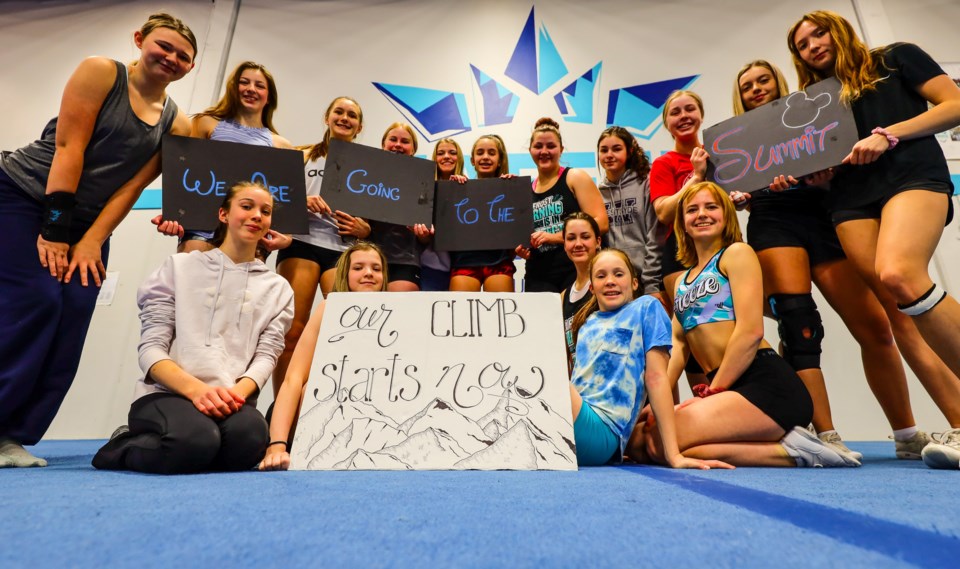 The Frozen Reign earned a spot at the Summit Cheerleading Championships. (via Freeze Athletics)

For the second time in their short history, a team from the local cheerleading gym Freeze Athletics has locked up a spot in the world's largest youth cheerleading event.

Sixteen members from "Frozen Reign," Freeze's International Senior Level 2 team, earned a spot at the international Summit Cheerleading Championships in Orlando after a first-place finish in their division at the New Years Classic in Vancouver on Jan. 11.

This was Frozen Reign's first competition of the year, scoring an 84.2 after deductions.

Keri Lewis, co-owner of Freeze Athletics, says it was an especially good showing given the composition of the team, which is made up of ages 14 to 18.

"Frozen Reign is a crossover-only team, meaning that athletes on this team are also on another all-star team and only come together to practice this travel routine once per week for one hour," she said in an email. "They practice Friday mornings 7 to 8 a.m.; the limited (and early) practice time and difficult division age requirements mean that it is a ton of hard work for these 16 athletes."

The team earned an at-large bid to Summit, but they're hoping to improve to a paid bid to offset some travel costs. In order to upgrade, they'll need a top-level performance at one of two upcoming events: either winning Feel the Power West on March 7 or finishing among the top three Canadian teams at the Sea to Sky competition April 3 to 5. Both events are in Vancouver.

Freeze Athletics will fundraise to help with trip costs. You can get updates on those events by following them on Facebook.

Local cheerleading teams Orlando bound
Apr 8, 2018 8:05 AM
Comments
We welcome your feedback and encourage you to share your thoughts on this story. We ask that you be respectful of others and their points of view, refrain from personal attacks and stay on topic. To learn about our commenting policies and how we moderate, please read our Community Guidelines.