Haze, blaze and workdays: Life as an initial attack crew leader at the Kamloops Fire Centre 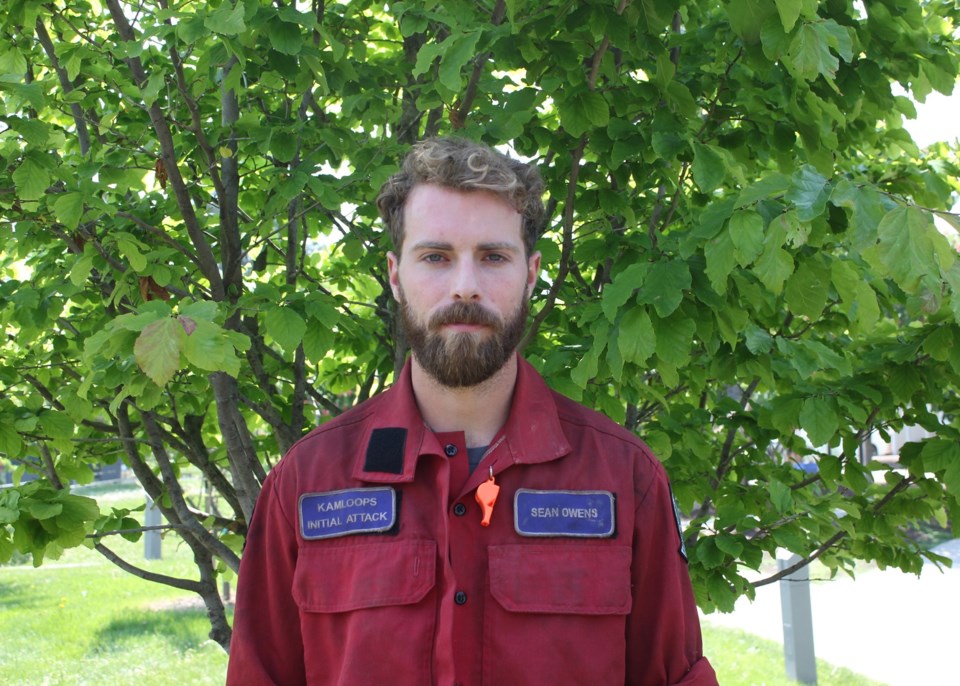 Sean Owens is an initial attack crew leader at the Kamloops Fire Centre. (via BC Wildfire Service)

Throughout September, KamloopsMatters will be profiling a BC Wildfire Service employee at the Kamloops Fire Centre. KFC coordinates the wildfire response across south-central B.C., from Blue River in the north to the U.S. border in the south, and from Bridge River in the west to Monashee Mountains in the east. The fire centre employs around 50 permanent staff and a large number of seasonal support staff.

The goal of this 10-part feature is to give our readers a better understanding and a bird's-eye view of what happens at the centre, and to put a face to the people who are behind the scenes and on the frontlines.

Sean Owens vividly remembers his first day on the job as an initial attack crew leader.

In 2017, a car had hit a powerline in Cherry Creek, causing the pole to fall. The crash ignited a grassfire adjacent to a house, and the garage ended up catching fire.

"Highway 1 was shut down. There was police doing road control. There were airtankers and skimmers and helicopters working to help control it," recalls Owens. "It was a bit of an intense situation to jump into. Fortunately, there was another initial attack crew there."

Initial attack (IA) crews are made up of three firefighters, including the crew leader. They're the first ones to respond to a wildfire after the call comes through dispatch.

These rapid-response crews are responsible for containing fires at the smallest possible size. IA can remain on a blaze for up to 24 hours without being resupplied. Often, IA teams travel by truck, or in some cases, by helicopter, if the area is remote.

(If there's nowhere for the helicopter to land, a rapattack crew is dispatched; the helicopter takes them to the fire, they rappel down and the helicopter lowers the equipment. To be part of the team, you can't weigh more than 175 pounds.) 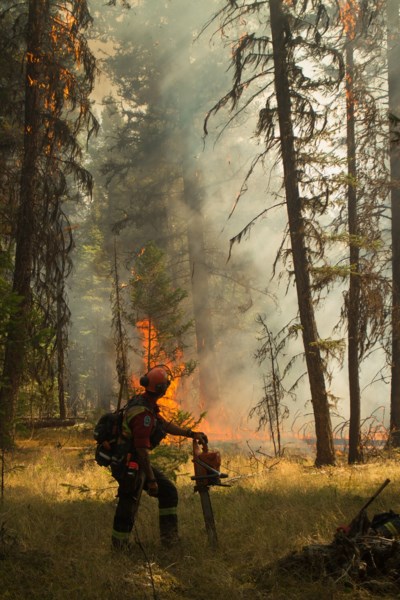 (via BC Wildfire Service)

Typically, a fire usually has one IA crew and is supported by a contract crew. A single IA crew is able to aggressively attack and contain a surface fire up to four hectares on its own.

The first thing Owens does when he arrives at the scene is he provides an initial report to dispatch.

"(I tell them) what I'm seeing on the ground, and request any additional resources, like crews or aircraft or any other gear we might need. Then we really start the work after that."

One of the main objectives for IA is to stop the spread of the fire. That can be done through a number of ways: using water pumps (to do this, crews need to find a nearby water source, like a lake or a river), clearing forest fuels from the fire's path, felling trees and building fireguards. Fireguards require crews to dig a trench — anywhere from one inch to three feet deep — around the blaze.

Unit crews are dispatched to larger fires. Made up of 20 people, these teams can be self-sufficient for up to 72 hours.

Once the flames have died down and the fire is near the end of its life, IA moves into the mop-up stage. This involves a process called "cold-trailing."

"(We're) using our hands to feel for any remaining heat on the ground. It's fairly obvious where there's any heat," he says. "There's tricks of the trade to see where hot spots are."

Owens, who's been with BC Wildfire Service for five fire seasons, got involved with the organization after a firefighting friend explained how exciting the work was.

"That's what made me want to apply," he says, adding he graduated with a forest resources technology diploma a couple of years ago.

When asked about challenges that come with the job, Owens pointed to a public misconception.

"I think there’s a big expectation that IA will be able to contain any and all unwanted fires. But there’s only so much that firefighters and aircraft can do when the fire is wind-driven and racing upslope," he tells KamloopsMatters. "It's managing that expectation. Sometimes it’s not as easy to control (the fire) as the public seems to think."

The busy wildfire summers of 2017 and 2018 were "exhausting, aggressive, challenging," says Owens. Long hours, scorching conditions and being away from family and friends all made it tough.

However, it was very rewarding.

"It's definitely a tradeoff. You miss out on a few things at home but you get this great experience with your crew throughout the whole summer," he says.

Haze, blaze and workdays: Life as a prevention specialist at the Kamloops Fire Centre
Sep 9, 2019 4:46 PM

Haze, blaze and workdays: Life as the airtanker boss at the Kamloops Fire Centre
Sep 5, 2019 4:45 PM

Haze, blaze and workdays: We're launching a two-week series on the Kamloops Fire Centre
Sep 3, 2019 11:35 AM
Comments
We welcome your feedback and encourage you to share your thoughts on this story. We ask that you be respectful of others and their points of view, refrain from personal attacks and stay on topic. To learn about our commenting policies and how we moderate, please read our Community Guidelines.