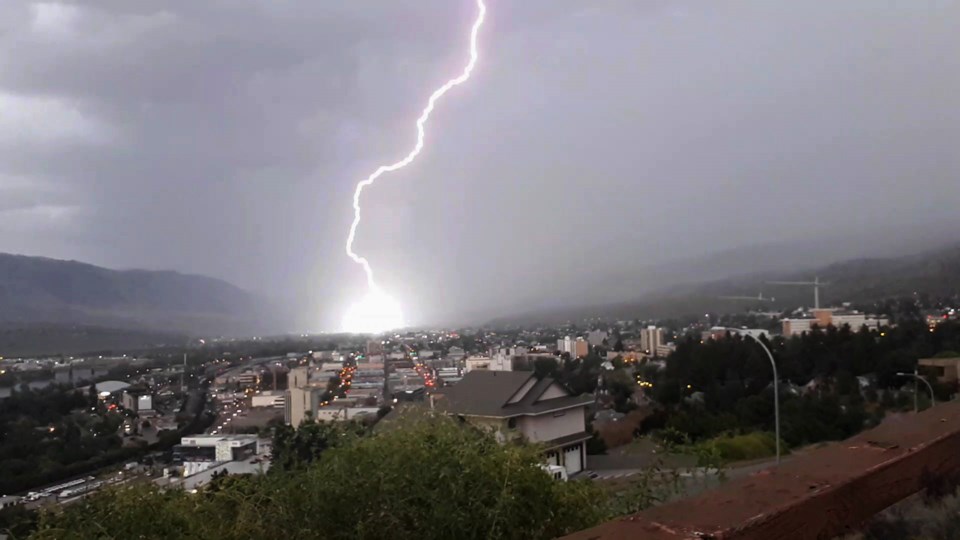 If you followed KamloopsMatters this summer, you're likely familiar with a severe thunderstorm watch, as there have been several issued in the past few months.

But you also may have noticed a conspicuous lack of watches put out last week. You know, that week that saw two incredible lightning storms hit the city?

(Yes, Environment Canada did issue a watch for the Sept. 7 storm, but it didn't come until the evening.)

"We don't warn for every thunderstorm," he says. "We only put out warnings for when we think they're going to be really severe, like winds gusting over 90km/h that would cause lots of trees (to come) down. We don't normally warn unless there's a severe, heavy rain; intense rain that would cause localized flooding or hail that would be big enough to cause damages."

Lightning on its own is not enough to constitute a warning from the weather authority. For a severe thunderstorm watch to be issued in the Kamloops area, the conditions need to be favourable to produce:

In the case of last week, a severe thunderstorm warning was issued on Saturday (Sept. 7), almost as the storm cells were overhead. Lundquist notes in that instance, there was a possibility of high winds in the South Thompson.

"A warning means we think it's imminent in the region," he says. "Not in every location, but somewhere in that region. Say we do it for Kamloops, somewhere in the Kamloops region, and the nature of thunderstorms is that not every neighbourhood gets it."

It has been a notable summer for thunderstorms in B.C., Lundquist adds. July was a record-breaking month in the province for lightning strikes, though records only go back about 20 years.

Despite all the lighting strikes, the Kelowna-based meteorologist says there were not many severe weather events and wildfire activity was down this summer.

Kamloops is getting some thunder and lighting!!! pic.twitter.com/KIsTG29t5x

As for this month, though the reduced heat and humidity will make it less likely that there are any more severe thunderstorms, Lunquist says there could still be a few more days of lightning, so people need to be careful.

"Lightning itself doesn't constitute the need to have a watch or warning out. That being said, people need to stay safe during thunderstorms," he says. "Anytime we have a thunderstorm in the forecast or, more importantly, if you hear thunder, it' time to go indoors. People are hurt and killed every year in Canada by the effects of lightning... we do need to take care."

Busy night for Kamloops fire crews during second thunderstorm of the week
Sep 8, 2019 10:11 AM

UPDATE: Power returns to Kamloops
Sep 4, 2019 8:10 AM
Comments
We welcome your feedback and encourage you to share your thoughts on this story. We ask that you be respectful of others and their points of view, refrain from personal attacks and stay on topic. To learn about our commenting policies and how we moderate, please read our Community Guidelines.