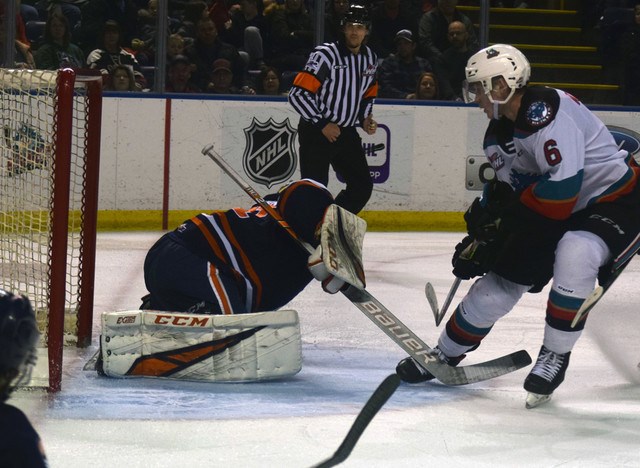 The Kelowna Rockets didn't have an answer for the top line of the Kamloops Blazers in their return from the Christmas break.

The line of Orrin Centazzo, Zane Franklin and Connor Zary had a hand in all four Kamloops goals in the Blazers' 4-0 win before a sold-out crowd of 6,202 at Prospera Place Friday (Dec. 27).

Centazzo had a goal and three assists, Franklin chipped in with two goals and one helper while Zary added an assist.

Rockets head coach Adam Foote says the Rockets gave away a lot of chances to the Blazers top unit.

"We gave it to them. We had a turnover for a two-on-one and an empty net, the first one, the power-play goal, I'm not sure that should have gone in," said Foote.

"It was more self-induced, but again, I don't want to overthink it."

Franklin opened the scoring with a wrist shot from the right circle that beat Roman Basran to the stick side on a Kamloops power play.

The Blazers broke the game open with three unanswered goals in the second. Franklin, Centazzo and Ethan Brandwood put the Blazers up 4-0, and chasing Basran from the Kelowna crease.

Dylan Garand turned away 25 shots for his second goose egg of the season.

Grand was forced to make just a couple of key saves, both in the first period.

He stoned Alex Swetlikoff during a goal-mouth scramble, then flashed the left pad to deny Mark Liwiski on a breakaway in the final minute of the period.

They didn't have much in the way of Grade A chances the rest of the way.

Foote says with three players in the lineup coming back from lengthy absences and the Christmas break, it was a hard game to analyze.

"I thought early we let a couple go and we weren't sharp," he says.

"They are a wily team, a veteran team and we have them a couple of opportunities they capitalized on. Then we were chasing the rest of the game. We looked tired."

Liam Kindree (upper body), and Dillon Hamaliuk (illness) both returned to the lineup after lengthy absences.

The Rockets travel to Vancouver to face the Giants Saturday before hosting Prince George in a rare Monday night contest at Prospera Place. The Blazers, meanwhile, will host the Everett Silvertips tonight (Dec. 28) at the Sandman Centre.