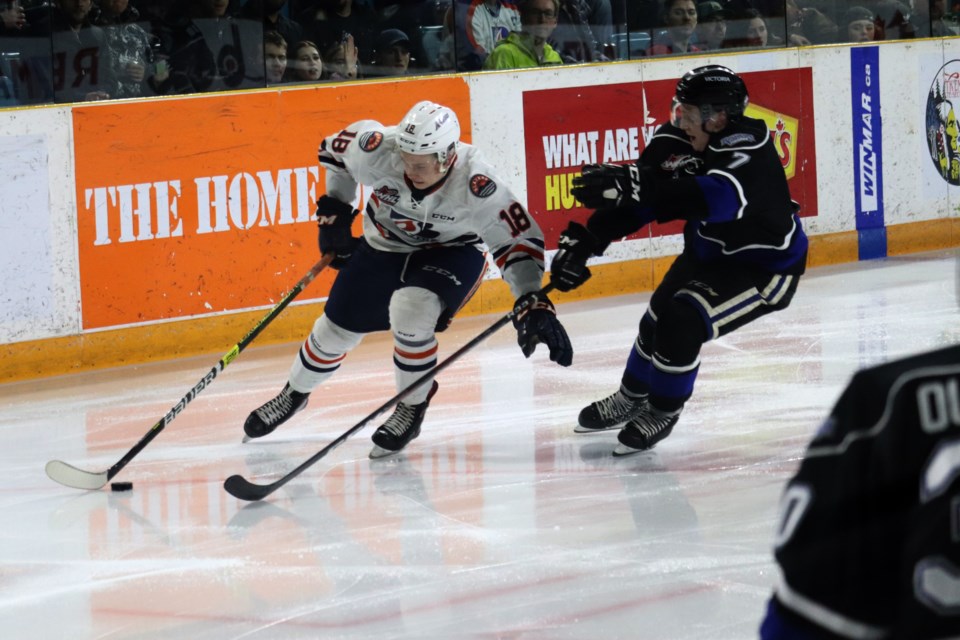 Inaki Baragano scored the game-winner midway through the third period, lifting the Kamloops Blazers to their sixth straight victory and a little revenge over the Victoria Royals last night (Oct. 25).

Ryan Hughes had two points in Kamloops 2-1 win on the island, assisting on Baragano's winner and scoring one of his own on the power play in the second to tie the game.

River Fahey gave Victoria a first period lead, but their offence was stymied from there, despite three power play chances.

Dylan Garand was strong in net, turning away 29 of 30 shots for his eighth win of the year.

Brock Gould allowed two goals on 27 shots in the loss.

The Royals knocked the Blazers out of the WHL Playoffs last season. With 14 players still remaining from that squad, Kamloops was able to take the first of eight meetings between the clubs this year.

The game also marked Cory Clouston's debut behind the Blazers bench, who is helping his brother Shaun as an interim assistant coach while Darryl Sydor is on a leave of absence.

The Blazers have been on a tear since dropping their first three games of the season, going 9-1 in their last 10. They lead the BC Division by three points over the Kelowna Rockets.

Kamloops and Victoria will go right back at it tonight with another game at Save-on-Foods Memorial Arena. Puck drop is 7:05 p.m.

Newest Blazer leads Kamloops to first win of the season
Sep 27, 2019 10:59 PM
Comments
We welcome your feedback and encourage you to share your thoughts on this story. We ask that you be respectful of others and their points of view, refrain from personal attacks and stay on topic. To learn about our commenting policies and how we moderate, please read our Community Guidelines.