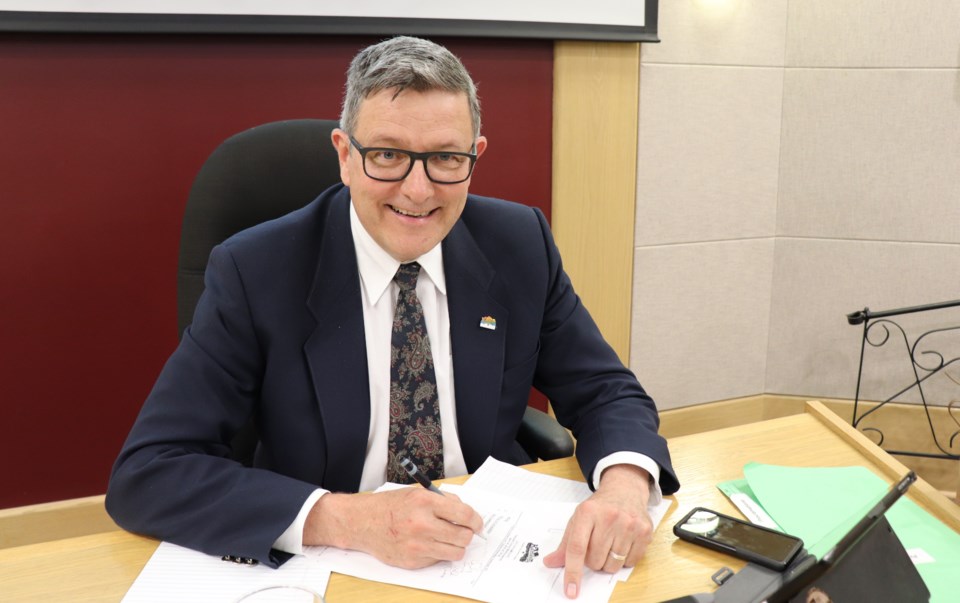 It's not happening until September, but Mayor Ken Christian is already putting together a wishlist of meetings for the Union of British Columbia Municipalities 2019 conference.

The gathering is a chance for municipal leaders to speak to provincial leaders, and Christian has eight cabinet ministers he's hoping to meet face-to-face to talk about some of the bigger issues facing Kamloops.

That includes a sobering centre in Kamloops, Stuart Wood schools land title, the location of schools in the future, and a research project involving Prince George and Kelowna. While his office will pitch the meetings, he's not certain how many will come through.

One of the meetings Christian is hopeful for is with Minister of Public Safety and Solicitor General Mike Farnworth, to discuss how the city and police deal with impaired people when they're arrested.

"We believe that in many instances we're using city jails essentially as a drunk tank," he says. "And that's not a good use of that resource, and secondly, it's not good for the people that are in it."

"People that have a problem with an alcohol addiction really need to be treated in a facility that can manage that addiction, and it is much more sensitive to their health needs," adds Christian.

At the same time, he notes Kamloops is a referral centre and therefore citizens of the city shouldn't be responsible for outsiders ending up here.

"There should be a better place than the municipal jail for a whole number of reasons."

Another minister he's hoping to catch up with is David Eby, who's responsible for the B.C. Lottery Corporation (BCLC).

The city is currently in the middle of an infrastructure project that will include the beautification of Victoria Street West. BCLC owns land currently empty at the eastern end of the project.

Christian adds he has assurances from Eby and the BCLC that Kamloops will remain the headquarters of the Crown corporation.

"What the focus of this discussion would be is the allocation of land dedicated for school sites," he says. "As developments, subdivisions and that are opening up in there, we need to secure tracts of lands, particularly for elementary schools and also for a secondary school site."

He notes in the coming years, it's expected 43 per cent of Kamloops' growth will be in the southwest, and therefore new school sites are being discussed in the Dufferin, McGowan and Pineview areas.

"Once we've got the land, they can build the school."

Cannabis revenue sharing will be on the table with Minister of Finance Carole James, and the land title for Stuart Wood is the planned topic with Minister of Forests, Lands, Natural Resource Operations and Rural Development, Doug Donaldson.

"We have a lot of people who are really interested in the concept, but no one can front us any kind of grant money until we actually have the title to the property," Christian says, referencing a cultural project in the concept phase which would integrate the Tk'emlups te Secwepemc.

One project Christian is excited to talk about is the tri-university, tri-city research project announced earlier this year.

"This is with us, Kelowna and Prince George; We're working with UNBC, UBCO and TRU," he says. "In this case, it's about studying and researching disaster management."

"Forest fires, floods, the establishment of Emergency Operation Centres, when you evacuate...they've taken the problem and they've dissected it three ways."

He's hoping to have a meeting with Emergency Management B.C. and Minister of Jobs, Trade and Technology Bruce Ralston on the subject.

"We're a laboratory for them, and they are an incredible asset for us because the three cities don't have research departments."

Christian says he and the mayors of Prince George and Kelowna have a strategy for approaching ministers at the provincial level.

"We try to advance things together when we can because we recognize you can pick off municipalities and play one against another, but if the three of us are speaking with a common ask and a common voice, it's far more effective for the citizens in our communities."

Two other meetings are being sought, following June 11's Kamloops city council meeting. Coun. Kathy Sinclair would like Christian to meet with Minister of Transportation and Infrastructure Claire Trevena about active transportation, and Coun. Arjun Singh requested there be a meeting with Minister of Environment and Climate Change Strategy George Heyman about climate change policy.

The province will decide which meetings will go forward, as municipalities apply for different spots.

The Union of British Columbia Municipalities conference, themed on resiliency and change, will run Sept. 23 to 27 in Vancouver, bringing together over 170 municipal governments. The current UBCM president is Kamloops' Singh.

Kamloops councillor wants to reignite discussion on mining laws and municipalities
Mar 1, 2019 8:35 AM

Kamloops council briefs: Vacant lot plan moves forward, National Indigenous Peoples Day coming and more
May 15, 2019 2:24 PM
Comments
We welcome your feedback and encourage you to share your thoughts on this story. We ask that you be respectful of others and their points of view, refrain from personal attacks and stay on topic. To learn about our commenting policies and how we moderate, please read our Community Guidelines.