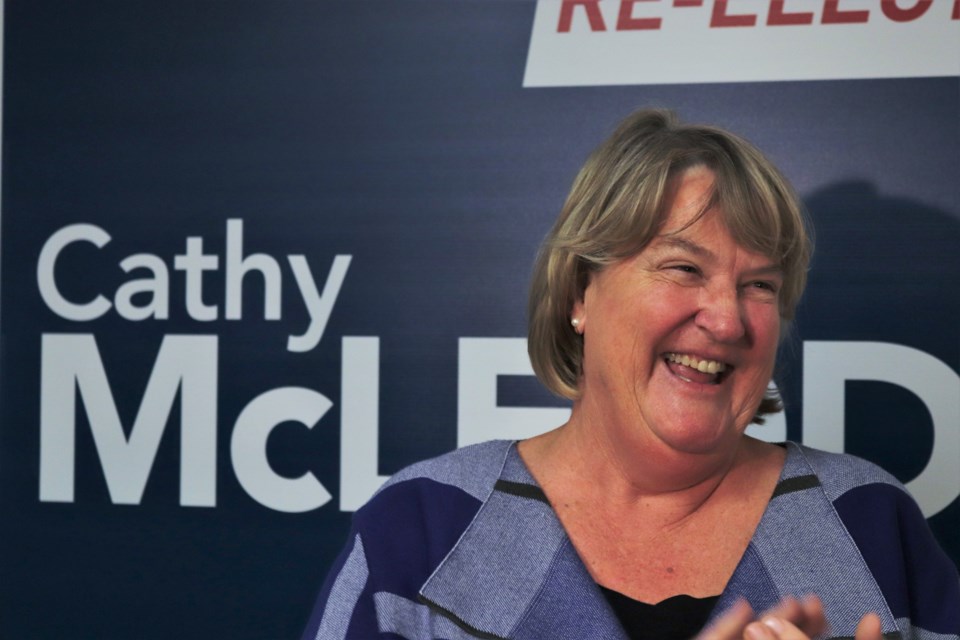 Cathy McLeod on Oct. 21, 2019, after learning she'd won another term as MP for the Kamloops-Thompson-Cariboo riding. (via Brendan Kergin)

Kamloops MP Cathy McLeod is once again backing MP Erin O'Toole for leadership of the Conservative Party of Canada (CPC).

O'Toole, the MP for the riding of Durham (which includes the town of Oshawa), is one of at least seven people running to be leader of the party, currently the Official Opposition in Ottawa. A former military helicopter navigator, achieving the rank of Captain, he practiced as a lawyer in Ontario before running in a federal byelection in 2012.

McLeod, who's served as MP for Kamloops-Thompson-Cariboo since 2008, says she knows O'Toole well and admires him.

Our nation is in crisis, from the pulp mill closure in Nova Scotia, to energy project cancellations in Alberta, to the shuttering of forestry mills in my home province of B.C. @ErinOTooleMP understands that one province’s challenges are the nation’s economic concern 1/3 pic.twitter.com/9M1zKnuOns

"It was important for me to make a decision in terms of who I want to support and get behind him," McLeod tells KamloopsMatters.

She sees O'Toole as one of the front-runners, along with Peter MacKay.

In 2017, McLeod supported O'Toole in his bid for CPC leadership, but he finished third behind Andrew Scheer and Maxime Bernier. This time, neither Scheer (who's stepping down) or Bernier (who started the People's Party of Canada) are running. However, MacKay, who's resumé includes six years as Prime Minister Stephen Harper's foreign minister, is running.

"The two front-runners are Peter MacKay and Erin O'Toole," McLeod says. "I think either one of them would be a better prime minister than the current prime minister."

While MacKay has a well-known name, she suggests O'Toole's built up a portfolio and reputation since the last leadership race and can take on Justin Trudeau in the next election.

"(He'll be) a serious prime minister who is articulate who won't embarrass us on the world stage," she says. "I'm not so sure people will be as interested in flash in the next election."

McLeod says O'Toole, who's from the east (born in Montreal, stationed in the Maritimes and now living in southern Ontario), would have a strong understanding of issues in Western Canada.

Canadian political pundits have suggested O'Toole is a more conservative choice compared to MacKay. McLeod says that because the party is relatively broad — a big tent conservative party — so unity is important. She says O'Toole will be able to do that.

"The most important part is if they can unite everyone," she says.

Candidates had until today to officially enter the race. The CPC will make its final decision on June 27.

I’m proud to be with @ErinOTooleMP and the true blue movement. Let’s unit together and take Canada back! 3/3