The new brewery will be unique in B.C. and may become one of the most experimental craft beer joints in the province
0
Jun 20, 2018 1:43 PM By: Brendan Kergin 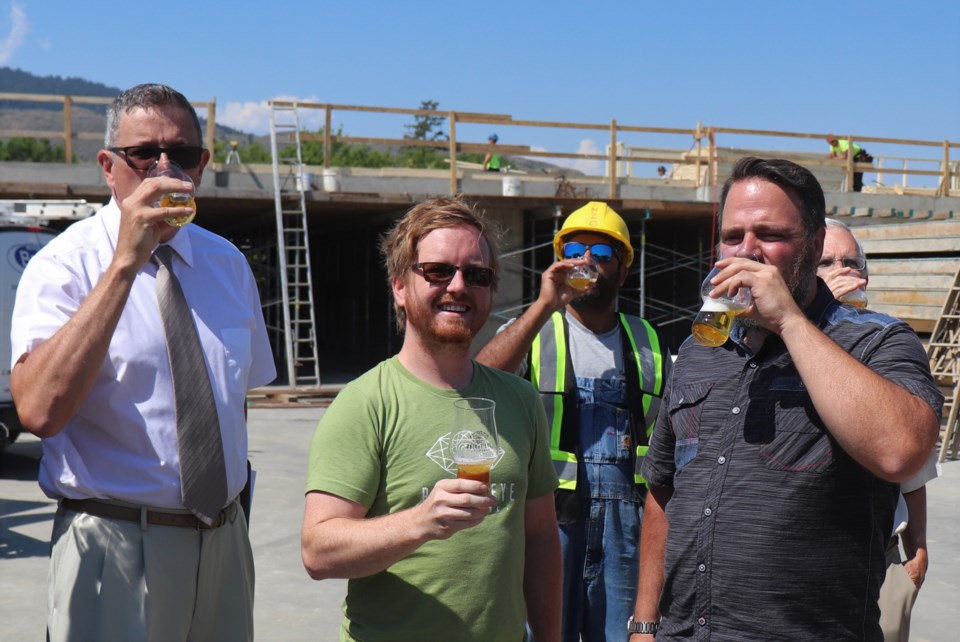 Anyone who's driven down the commercial section of Tranquille Road probably has seen the large concrete development under construction.

On Wednesday (June 20), the people behind it toasted to its future.

The Station, at 280 Tranquille Rd., is a mixed residential and commercial space bringing some unique aspects to Kamloops.

At Wednesday's event, Joshua Knaak, one of the partners with Arpa Investments (the developer behind the project), told the crowd The Station will feature Bright Eye Brewery, micro-suites and space for the United Way.

Mitch Forgie, co-owner of the nearby Red Beard Café at 449 Tranquille Rd., is one of the groups behind Bright Eye Brewery, slated to be the fifth craft brewery in Kamloops and the first on the north side of the river. He says it's going to be a unique model for the region and could become a destination for brewers looking to experiment.

"The straight-from-the-tank model sort of exists in B.C. at Tree Brewing and it sort of exists at the Noble Pig," he says. "We're literally pouring from the side of the bright tank. When you come to visit, you're literally going to be in the brewing."

The brewery will be "very collaborative" in its approach.

"We intend to do a farmers market beer where we find something at the farmers market that inspires our beer and then we use that. In launching, we're doing collaborative beers with other breweries across the province."

They've already started brewing and have worked with Doan's Brewing from Vancouver and have plans to work with locals Iron Road and Penticton's Cannery Brewery. Forgie also hopes to have brewers from larger breweries come in for guest spots, to try something experimental they wouldn't be able to do on a large brewery's system, like a beer laboratory.

"We want to invite them here because their brewer might have been dreaming of this crazy idea ... and they can't do it," he says. "But hey, come on up to Kamloops. How fitting that a sort of 'incubator brewery' happens to be beside the Kamloops Innovation Centre?

While the microbrewery is one unique aspect of The Station, Knaak says there's another one: micro-suites. They're essentially tiny apartments under 400 square feet, and it's the first time they've been on the market in Kamloops. So far, the reception has been positive, according to Knaak.

"The architect we worked with on this project is a local architect, but he's done some work in Kelowna as well," he says. "One of the things he suggested to us when we first propositioned this project is we should look at micro-suites because they've taken off in Kelowna."

The small living spaces will require an efficient lifestyle, space-wise.

"They vary in size; in this building, they're 342 to 370 square feet. It's effectively a studio unit," he says. "You walk in, you've got your bathroom, you've got in-suite laundry, you've got a full kitchen, full sized appliances.

"In most of these, there will be convertible furniture, and it's come a long way from your grandma's Murphy bed."

Coun. Kathy Sinclair is one of the buyers, and she plans to move in when The Station is complete sometime next spring.

"I'm really looking forward to it. I think, for me, it really makes sense," she says. "I'm really not home very often. I socialize a lot, but I socialize at my local neighbourhood restaurant or community hall."

Sinclair is moving into one of the smallest spaces, at 342 square feet, and while she expects to have to do a bit of a cull of material items, she doesn't foresee it being a major issue.

Mayor Ken Christian was also at the event, and commented on the fact the new development, along with another Arpa Investments project at Spirit Square, shows confidence in the future of the North Shore.

"It really shows that we are making a transformation of (the Tranquille Road) corridor," he told the crowd. "I've coined this as the new Commercial Drive, and the vibrant and colourful and multicultural nature of this neighbourhood is just really exciting."