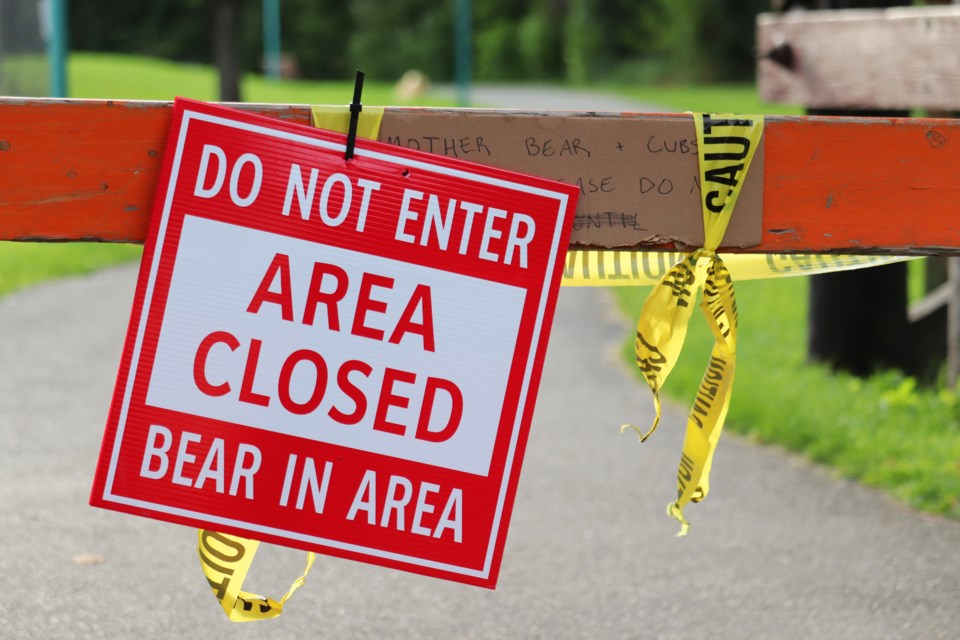 Waterfront Park remains closed due to bears in the area. (via Brendan Kergin)

The City of Kamloops has reopened Waterfront Park; the roaming bear family has left the area.

The park and the pathway between Riverside Park and Pioneer Park are once again open to the public.

According to the latest update from the city, the sow and her cub have moved on. It is still unclear what happened to the second bear cub that was seen with the family while they were wandering through the North Shore.

Waterfront Park remains closed today (Aug. 22) as conservation officers check up on a family of bears that are wandering through the City of Kamloops.

The portion of the trail between Riverside Park and Pioneer Park was closed to the public last night after the mother bear and one of her cubs were spotted in a tree.

"We are going to continue to keep that closed until we can locate the bear," says Tammy Blundell, bylaw services supervisor. "It's just easier to keep that portion closed, rather than open it and close it again and try and get people out of there."

Blundell confirmed this is the same bear family that was spotted on the North Shore, and led to the closure of McArthur Island Park. She's unsure if they swam across the river or crossed on the bridge.

However, conservation officers only observed one bear cub last night. Previously, there were two travelling with the mother.

"We don't know if she lost one; if she put it up in a tree and said, 'I'll come get you later.' We don't know," says Blundell. "That's why the conservation officer is on site right now, he's trying to investigate and see if he can locate her with the baby. We're hoping for good things for it but we just don't know. It's called nature and nature takes its course."

The bears have been in town for a few days, so Blundell says there is a little worry that they'll become habituated.

"The biggest thing we can do is keep garbage contained, pick up after yourself and stay away. The more people are lookie-loos and that kind of thing, the more she becomes habituated to people. That goes the same for garbage. It only takes one bin for her to go through and now she's hooked."

Blundell will continue to work with the city's communications team to update the status of the bears.

You can get updates on the situation HERE.

Fear of bears outweighs common sense around water: Kamloops expert
Jun 7, 2019 2:35 PM
Comments
We welcome your feedback and encourage you to share your thoughts on this story. We ask that you be respectful of others and their points of view, refrain from personal attacks and stay on topic. To learn about our commenting policies and how we moderate, please read our Community Guidelines.