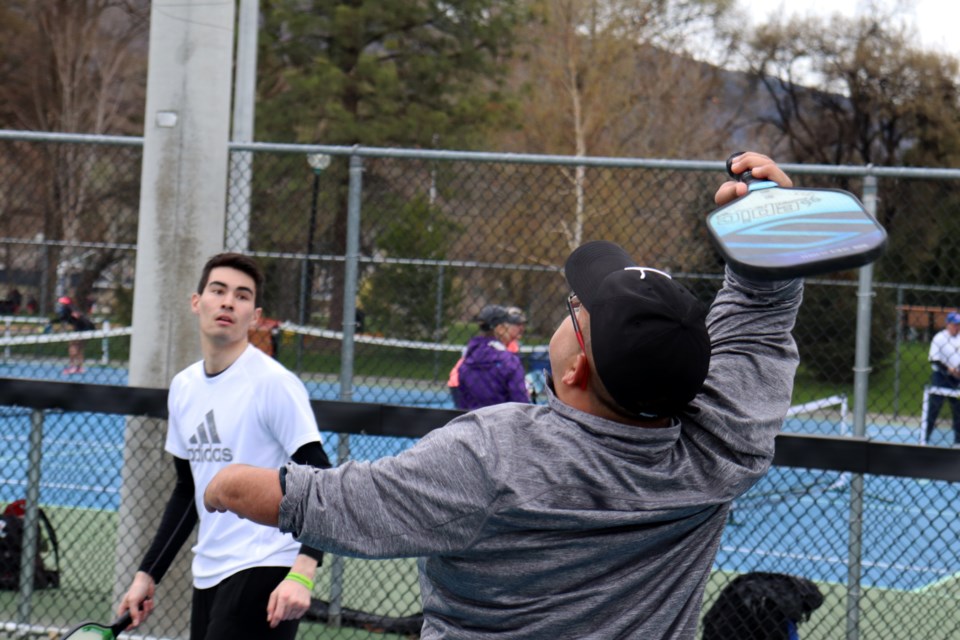 Jeremy Comazzetto prepares for a spike while partner Chris Ross watches. The duo won silver in the men's doubles 4.0 skill level. This photo is from the Legacy Games on April 21. (via Eric Thompson)

It's the fastest growing sport in Canada, and it has a particularly strong following locally, so obviously, members of the Kamloops Pickleball club showed well at the  Pickleball Canada National Tournament in Kelowna last weekend.

"Nationals has really changed in the last two to three years," says Wilma Steinke, a member of the Kamloops Pickleball club. "The calibre of play has just gone way up because we're getting those young people in their 20s starting to play really top-notch pickleball now."

Local Jayna Mikuse led the results, winning gold in the women's doubles open division (the highest level in the country) along with her partner from Penticton, Roberta Meakin. She also captured a gold in the mixed-doubles senior (50+) open, while partnering with Jay Ripple.

Casey Rodgers found the top of the podium twice as well, winning gold in both the 4.5 division mixed-doubles with Brent Jackson and the women's 4.5 doubles with Kristina Lidster.

As for Steinke, the 63-year-old also managed a bronze medal in her first nationals, playing in the women's 4.0 division.

Over 400 players were at the three-day tournament in Kelowna, with 16 players and a few more referees coming from the Kamloops club. There are currently over 350 members in the Kamloops Pickleball club.