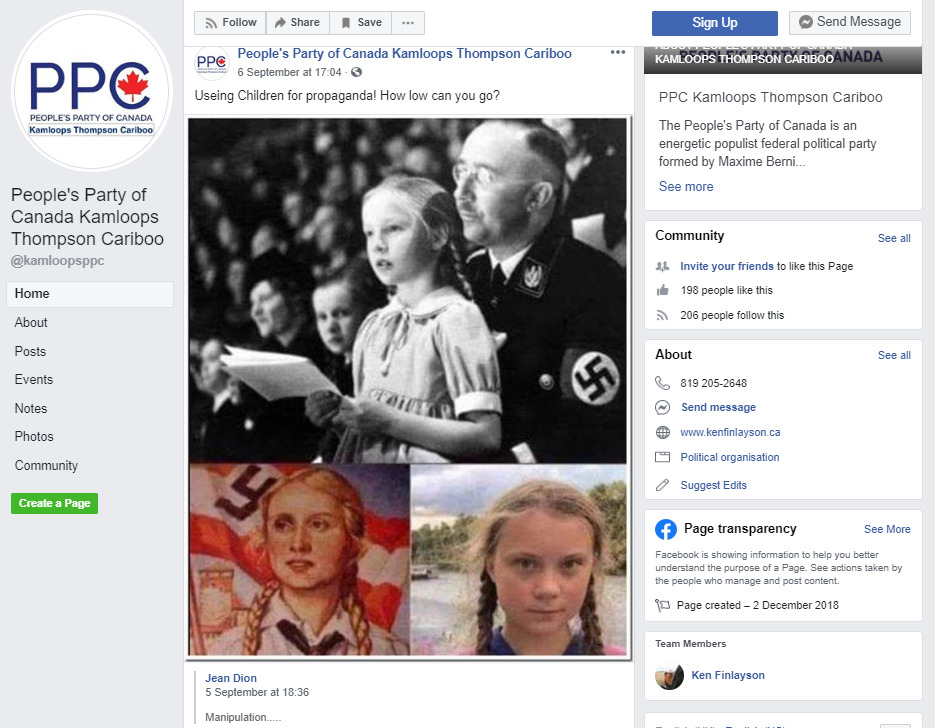 Ken Finlayson — the local People's Party of Canada candidate — is standing by a social media post that compares climate activist Greta Thunberg to Nazi propaganda from the 1940s.

The post was shared on the People's Party of Canada Kamloops Thompson Cariboo Facebook page earlier this month. It shows Thunberg next to a poster from the Hitler youth movement and a photo of Heinrich Himmler with a little blond girl. Underneath the original post, it simply reads "Manipulation....." The PPC post states "Useing [sic] Children for propaganda! How low can you go?"

Finlayson says he was the person who shared the post to the Facebook page and stands by the comparison.

"I pity Greta Thunberg. I think the exploitation of children, which I think this is a case of, is a Nazi tactic. And especially so with a child who's suffering from a disease," he tells KamloopsMatters.

Thunberg is a Swedish teenager who's made international headlines since August 2018 for her climate change activism. She started, alone, sitting in front of the Swedish parliament buildings; more recently, she spoke at the United Nations General Assembly and at a US congressional hearing. Thunberg also has Asperger Syndrome (also called Asperger's, a mild form of autism). In a recent tweet that went viral, she spoke about how it can help her see things differently.

"That's what the Nazis did with children," he says. "I think if you're exploiting vulnerable people to serve a political agenda, I think that's a fair comparison."

He says, instead, she should be "protected and pitied" because of her "affliction."

"It's a sad case of exploitation of a person who's already suffering."

Heidi Coleman, president of the Kamloops Jewish Community says the use of Nazi imagery is "insulting" and "scary."

"It's a juxtaposition that does not sit well with me and I'm sure others in the Jewish community as well."

Jeffrey Meyers, a law professor at Thompson Rivers University (TRU), with expertise in right-wing politics, says the use of the post and posts like it are "right out of the Alt-Right playbook."

"We cannot allow this type of toxic and nihilistic politics to gain a similar toehold in Canada. Suggesting that an embrace of young climate activist, Greta Thunberg, is equivalent to Nazi propaganda is beyond the pale," he says. "In fact, it's the PPC candidate’s post which most resembles Nazi propaganda. What better way to prove your own cruelty and small-mindedness than to post this ridiculous false equivalence?"

Meyers says attacking Thunberg in this way has a "whiff of misogyny" and is insulting to today's youth.

"I think it's a real insult to the youth of the world, many of which are highly engaged in political issues before they reach the voting age, and many of whom are concerned about the long-term effects of the environment, because they're going to inherit this world," he says.

Posts like this show the Overton Window (the term for the range of ideas considered acceptable for public discourse) is opening, according to Meyers.

"So there's no question that the Overton Window has opened; however, in Canada, as long as these individuals remain in fringe parties and outside the mainstream parties, at least we have a fighting chance of protecting our political discourse from extremist views."

"It demonstrates that this particular PPC candidate is willing to use deeply disturbing rhetoric and false analogies in order to gain any media attention possible," he writes in an email to KamloopsMatters. "It’s either desperation or a profound inability to understand climate change and what it takes to show political leadership in Canada."

Finlayson doesn't know how the post might affect his campaign, but notes he's not changing his stance.

"Maybe people disagree with me," he says. "That's one thing about the People's Party, we're not weather vanes."

Editor's note: As of 3 p.m. on Friday, Sept. 20, the post shared by Ken Finlayson has been removed from the People's Party of Canada Kamloops Thompson Cariboo Facebook page.

Trudeau to call election Wednesday with morning visit to Rideau Hall
Sep 10, 2019 11:16 AM

Opinion: It’s time to face facts, diversity makes Canada stronger
Sep 11, 2019 10:05 AM
Comments
We welcome your feedback and encourage you to share your thoughts on this story. We ask that you be respectful of others and their points of view, refrain from personal attacks and stay on topic. To learn about our commenting policies and how we moderate, please read our Community Guidelines.