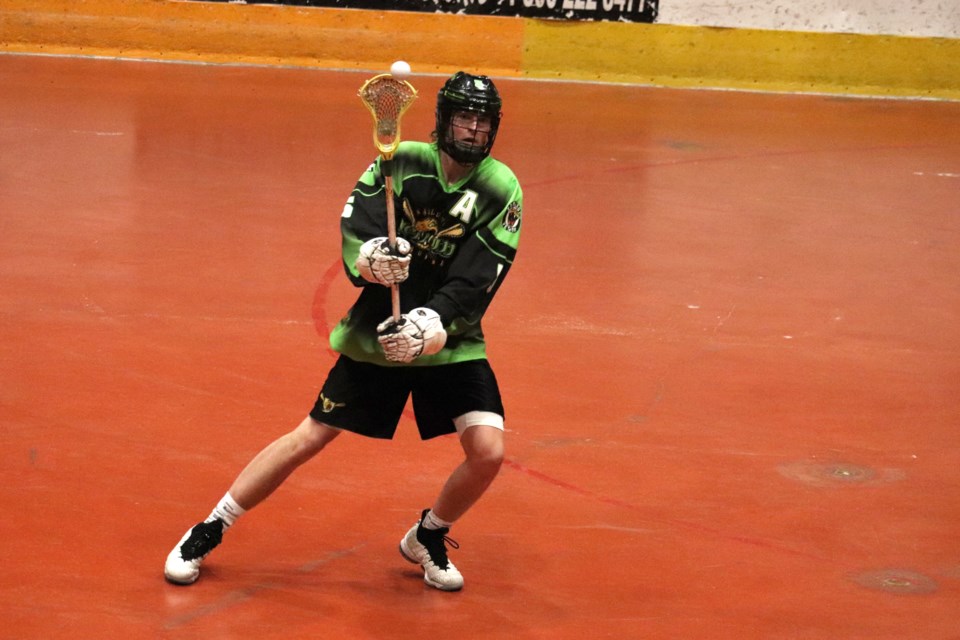 Tylor Seabrooke accepts a pass during a June 10 game. (via Eric Thompson)

The Kamloops Venom have backed themselves into a corner after dropping game two of the Thompson Okanagan Junior Lacrosse League 20-7 to trail the Vernon Tigers in the series 2-0.

Despite having the home crowd behind them on Tuesday, the Venom spent more time in the sin bin than on the attack, racking up 70 penalty minutes over the course of the game.

Kamloops took an early 1-0 lead on a Tanner Koroluk goal, before the Tigers clawed their way back, taking a 6-3 lead into the second period. The Venom could never recover from that deficit, taking 32 minutes worth of penalties in the second as Vernon scored six unanswered goals to lead 13-3 before the final frame.

Anthony Matusiak had a pair of goals for Kamloops while Trey Dergousoff, Colton Boomer and Kordell Primus rounded out the scoring. Troy Cuzzetto and Ethan Milobar both got time in net in the blowout loss, with Cuzzetto allowing 14 goals and Miolbar allowing six.

The Venom managed a much more competitive effort in Vernon in game one, when they dropped a 13-12 decision. If Kamloops can't muster a similar game on Thursday night (July 19), the best-of-five series will be over and the reigning three-time league champions will have to pass the torch to the Tigers.

Thursday's game starts at 7:30 p.m. at Kal Tire Place in Vernon. If necessary, game four will be at Memorial Arena on Saturday night, starting at 7:30 p.m. also.