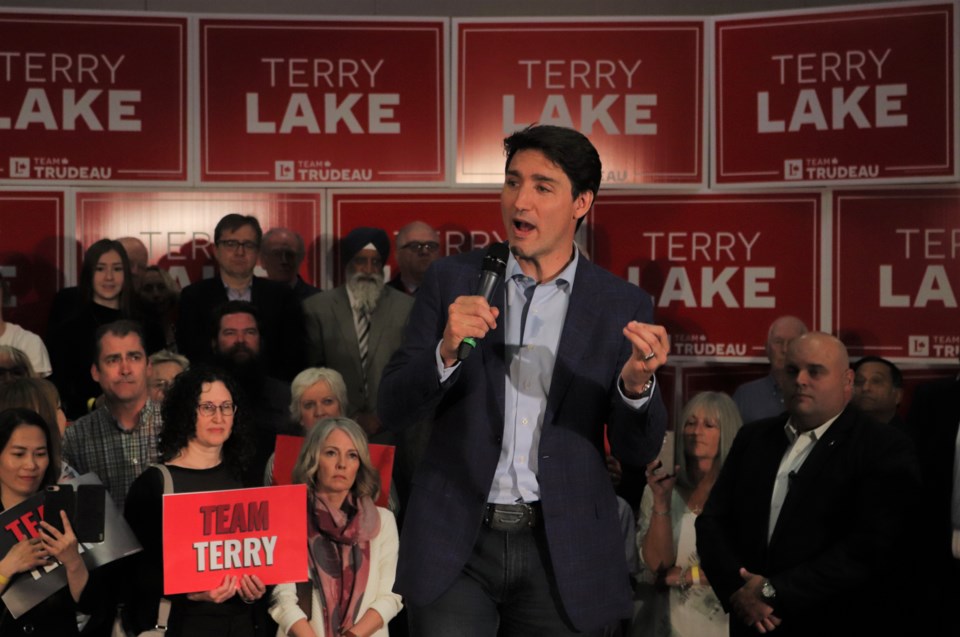 Prime Minister Justin Trudeau speaking at the acclamation of Terry Lake as the Liberal party's Kamloops candidate. (via Brendan Kergin)

The prime minister is scheduled to make a stop in Kamloops today (Sept. 12).

That's according to the Liberal Party of Canada itinerary, which states he'll be attending an event with Kamloops-Thompson-Cariboo Liberal candidate Terry Lake. (KamloopsMatters will be livestreaming the event, so follow our Facebook page.)

This is the prime minister's third visit to Kamloops this year. Trudeau came to town for a few days in January; he attended a Liberal Party of Canada fundraiser, met with the mayor and local leaders and hosted a town hall at Thompson Rivers University. Trudeau returned to Kamloops in May to throw his support behind Lake at a nomination event.

After the writ was dropped, Trudeau flew to Vancouver to launch the federal Liberals' re-election campaign.

The itinerary then took him to Victoria, where Trudeau's election plane sustained some damage after a media bus drove under one of its wings.

The plane had just landed in B.C.'s capital after transporting Trudeau, his team and several journalists travelling with the campaign.

A bus was parked close to the plane to transport the journalists from the tarmac. As it departed, it drove under the wing of the plane, making a loud scraping sound as the top of the bus slowly dragged under the wing. The bottom of the wing had visible damage.

Here is some video from the accident where the Liberal media bus struck the wing of the campaign plane #cdnpoli #elxn43 pic.twitter.com/YUnjVogUqs

The other Kamloops-Thompson-Cariboo candidates are: incumbent Conservative MP Cathy McLeod; Iain Currie for the Greens; rancher Ken Finlayson of the People's Party of Canada; Peter Kerek of the Communist Party; and Kira Cheeseborough of the Animal Protection Party of Canada.

— with files from The Canadian Press