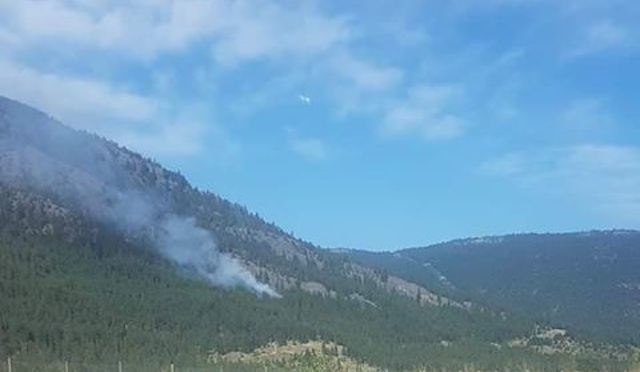 A fire is burning north of the Okanagan Connector Tuesday afternoon. (via Nichole Simmons)

The fire sparked off Trepanier Road, north of the Okanagan Connector, Tuesday afternoon is now considered “held,” after crews hit the fire hard and fast before nightfall.

The Mount Miller fire was sparked shortly after 4 p.m. and quickly threw a large plume of smoke into the air, which was highly visible from the Okanagan Connector.

After growing to about 0.8 hectares in size through the afternoon, quick work from airtankers and helicopter pilots, along with 30 BCWS firefighters, slowed its growth.

Five firefighters monitored the fire through the night and as of Wednesday morning, the BCWS considers the fire held, meaning they don't expect it to grow any further.

Three firefighters remain on scene Wednesday, mopping up the fire.

While the BCWS is still investigating the cause of the fire, it's suspected to be human-caused, as there was no lightning in the area at the time.

Crews are expected to continue fighting a wildfire this morning that sparked Tuesday evening near the Okanagan Connector, off Trepanier Road.

The fire was last estimated at 0.8 of a hectare in size.

A further update is expected later this morning.

Air support on the wildfire off Trepanier Road stopped just after 8 p.m., after helicopters and airtankers dropped water and retardant on the blaze before night fell.

While residents in the area said the fire was initially moving down the slope towards homes, crews appeared to have slowed its growth significantly.

Thirty B.C. Wildfire Service firefighters were on scene fighting the fire earlier Tuesday evening, but it's unknown how many will remain on site overnight.

The B.C. Wildfire Service (BCWS) is responding to the fire burning off Trepanier Road, north of the Okanagan Connector.

While 10 BCWS firefighters initially responded to the fire, an additional 20 are now heading to the scene. They're being supported by air tankers and helicopters.

Fire information officer Taylor MacDonald says they've estimated the blaze to be about 0.75 hectares in size.

While the fire was just recently discovered, the BCWS suspects it is human-caused.

Wayne Shaw, a resident of nearby Paradise Valley Drive, says he can see the fire moving downhill, toward the homes in the area, and he can see flames from his kitchen window.

A wildfire appears to be burning in the hills above the Okanagan Connector, just north of Peachland.

At about 4:25 p.m., Nichole Simmons spotted the smoke on the north side of Highway 97C, near the Trepanier Road turnoff.

Another Peachland resident says she's seen several water bombers flying toward the fire at about 5:30 p.m.

The new fire has yet to be added to the B.C. Wildfire Service's wildfire map, and a fire information officer is working to provide Castanet with more detailed information about the blaze.

This story will be updated as more information becomes available.

Eagle Bluff fire: Air quality advisory issued for South Okanagan
Aug 5, 2019 3:38 PM
Comments
We welcome your feedback and encourage you to share your thoughts on this story. We ask that you be respectful of others and their points of view, refrain from personal attacks and stay on topic. To learn about our commenting policies and how we moderate, please read our Community Guidelines.