B.C. SPCA’s branch in Prince George is asking the public for information after recently finding nine cats in poor condition.

According to the North Cariboo and District Animal Centre, two kittens and seven adult cats under the age of three were found by the manager of a vacant property after they heard meows from inside storage bins and had taken them to a local veterinarian.

The felines were covered in urine and matted with feces and were given such a poor score on the SPCA’s body condition scale that they had to be shaved.

“These cats were starving,” said North Cariboo SPCA Services Manager Alex Schare in a statement. “Some of the adult cats would not have lived much longer and will require a refeeding plan to slowly reintroduce their bodies to food.”

He goes on to explain the cats were believed to be trapped in the containers for days without any food or water and were only breathing through several air holes punched in the lid. 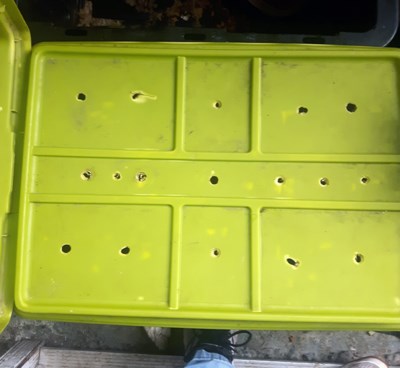 Nine Prince George Cats were found in this storage bin on a vacant property (via B.C. SPCA)

The cost to care for the nine animals is expected to be above $3,000.

“Despite everything they have been through, all of the cats are vocal and friendly,” says Schare. “As the property was vacant at the time and the cats were found outside it is not known who is responsible for this act of cruelty.”

If you wish to help these cats financially, you can go to B.C. SPCA’s medical emergency website.

VIDEO: More than $20K raised for Prince George's China stowaway cat
Apr 10, 2019 10:48 AM
Comments
We welcome your feedback and encourage you to share your thoughts on this story. We ask that you be respectful of others and their points of view, refrain from personal attacks and stay on topic. To learn about our commenting policies and how we moderate, please read our Community Guidelines.

About the Author: Kyle Balzer

Kyle Balzer graduated with distinction from BCIT's Broadcast & Online Journalism program in 2016. Since moving to Prince George, he has covered a variety of stories from education & Indigenous relations, to community interests & sports.
Read more