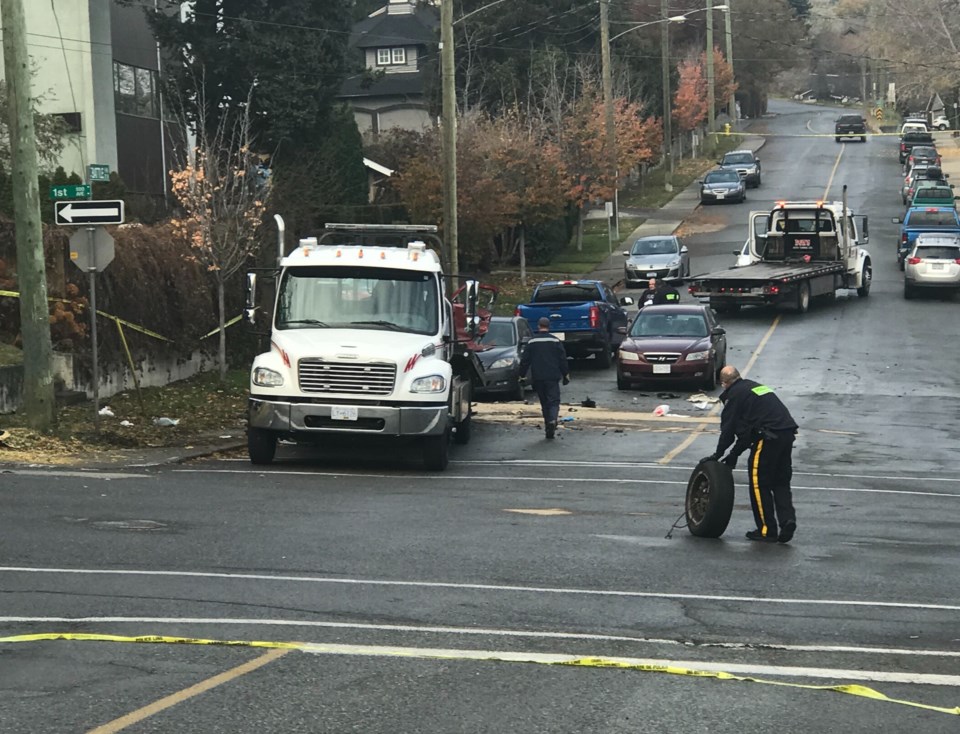 The accident scene. (via Brendan Kergin)

No charges have been laid against the owner of a blue pickup truck who was arrested in connection to yesterday's fatal crash in downtown Kamloops.

The man was released Sunday (Nov. 3), according to a police press release, after being arrested earlier in the day.

The crash, between the truck and a red sedan, happened at 1:40 a.m. at the intersection of First Avenue and Battle Street. It left two people dead, one critically injured and one with non-life threatening injuries.

The driver of the pickup fled the scene on foot. Police arrested the owner of the truck hours later.

Police are still investigating who the driver of the pickup was, Cpl. Jodi Shelkie tells KamloopsMatters.

Meanwhile, the individuals killed were two males in their 20s, according to RCMP.

In a statement released earlier today, the president of Thompson Rivers University stated the four people in the car were international students and alumni.

The one person with critical injuries is still alive in hospital, Shelkie says.

She adds the notification of next of kin has just wrapped up.

As part of their investigation, police were at a residence on Fernie Place, near Guerin Creek.

Currently, the BC Coroners Service is investigating the incident, along with the Kamloops RCMP serious crime unit, integrated collision analysis reconstruction services and forensics.

UPDATE: Man arrested after accident leaves two dead, two in hospital in downtown Kamloops
Nov 3, 2019 1:36 PM
Comments
We welcome your feedback and encourage you to share your thoughts on this story. We ask that you be respectful of others and their points of view, refrain from personal attacks and stay on topic. To learn about our commenting policies and how we moderate, please read our Community Guidelines.