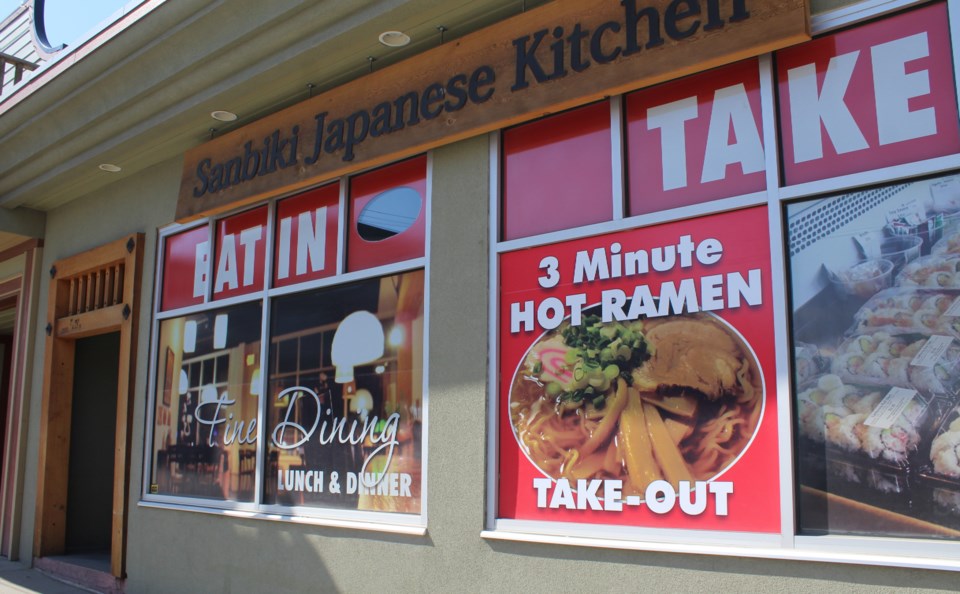 The former Sanbiki Sushi location will see a new food service tenant with Forno on Fifth. (via Brendan Kergin)

It may traditionally be for pizzas, but a Forno oven has lots of other uses, including being an inspiration for a restaurant name.

Forno on Fifth, an upscale restaurant serving a variety of Mediterranean food, is planned for the intersection of Fifth Avenue and Lansdowne Street. The operations/chef team of Maeghan and Jared Summers are aiming to launch it in August.

Maeghan, who deals with the operations, says she's seeing growth in the downtown core, which makes it the right time and place for the new project.

"There're some incredible restaurants in downtown – Terra, Brownstone, the Commodore, Mittz Kitchen – all of them that are downtown, they have a very distinct market that they're appealing to," she says. "We're trying to build on what they're doing and create downtown as a dining destination so there are unique options. You never want to oversaturate the market."

She cites the new 580 Victoria St. development and relocation of KPMG offices to the former casino location in Hotel 540 as concrete examples of the growth going on.

Forno on Fifth will join others in the fine-dining category, but the couple seeks to bring something new, and significantly different from their Noble Pig brewpub.

"The idea behind it being that we're trying to bring a fusion of different Mediterranean cuisine into this environment," she says. "It includes things like Moroccan cuisine, and Greek and Italian. We're taking a blend of those cultural components."

The Forno oven will be the almost literal pillar of this concept.

Typically used for pizzas, Maeghan says Jared is a longtime fan of the unique kitchen equipment and wants to use it for a much wider variety of foods, though he'll have to wait for it to ship from California and be reassembled. It won't be the first one in Kamloops, as places like Bold Pizzaria and Earl's each have one.

Along with the Forno, there will be a spirits selection focusing on craft and local items.

"There's going to be a strong craft cocktail, craft spirit and craft beer component to this location," she says. "That includes really unique whiskeys, bourbons and celebrating local craft spirits."

Forno on Fifth won't be completely separated from the Noble Pig, though. The brewpub will supply three beers for three taps at the new location.

"Because we're a little different from Iron Road and Red Collar – we do smaller brews so it allows us to have a lot of flexibility," Maeghan says. "So it allows us to open three more taps in this new location that'll have different beers than what we have at the Noble Pig.

The project is taking over both the former Sanbiki location and the attached shop, with an expected 120 seats when all is finished.

While August is when the couple hopes to open the doors, Maeghan says that all depends on construction.