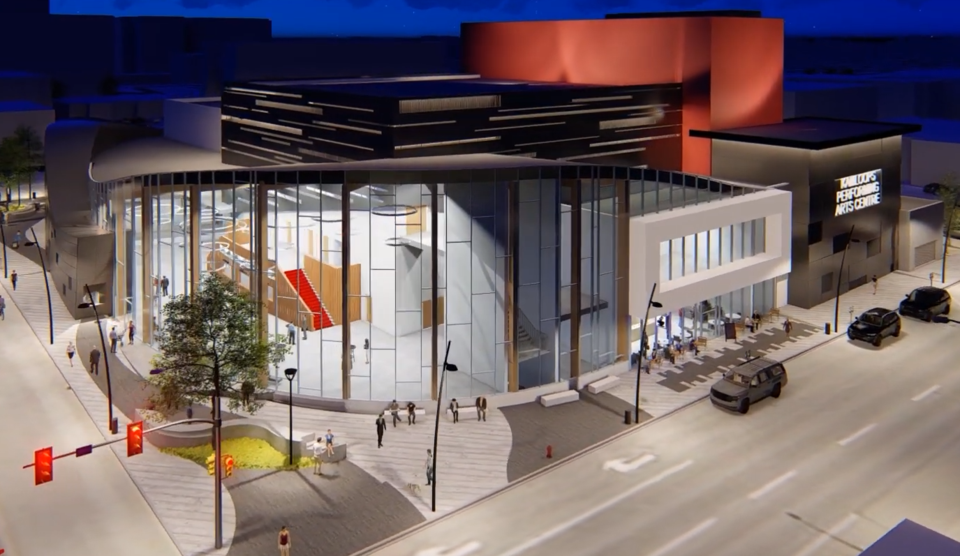 A rendering of the performing arts centre. (via CHP Architects)

It might not be planned for the North Shore, but the North Shore Business Improvement Association is still supporting the proposed Kamloops Centre for the Arts project.

Art spreads across the city, executive director Jeremy Heighton says, and therefore a major arts centre would benefit the whole city, including the North Shore.

"I'll be honest. The day I started here, I thought, 'You know, wouldn't the Henry Grube site be an amazing site for a performing arts centre? Overlooking the South Shore?'" he tells KamloopsMatters. "The reality is, I met with Peter Milobar within my first couple of months here and he identified the city had looked at the site."

"The geotechnical work would have been about $58 million in order to proceed and then you have to reorganize the traffic system, you have to look at the surrounding housing and if you have to buy it, so there were some challenges," adds Heighton.

While the North Shore doesn't have any sites that would meet the needs of a large performing arts centre, Heighton says the downtown plan is still a positive for the community.

"I think the time has come where we can no longer have a whole series of disjointed arts facilities," he says. "I think we need a proper arts centre — a hub if you would — where people come to gather to experience arts in a number of ways, whether it's visual art, performance art or whatever."

"The reality is we are in favour of it because it's time."

There are some issues that are important, Heighton notes, but so far what he's heard quells those concerns.

"It sounds like it will not impact taxation; it will just continue along at basically the same rate, which was a concern for us," he says. "And it also sounds very much like the city and the downtown business owners are looking at constructive opportunities for parking management."

"For me, the questions are: do we need it? Does it fit within our budgeting? And is it the best place for it? And I think at this point it would probably be."

The flip side is the benefits, which would be a more robust arts community, Heighton says. In particular, for the North Shore, it would mean a stronger arts community to pull from for local performances, from buskers to festivals.

"So while we're looking at creating this artistic, fun, funky sort of corridor, the reality is a performing arts centre is needed for any community to promote the growth of art at all levels," says Heighton. "Once you have that, it stimulates that growth of arts across the community, and that's what we'll be tapping into."

Kamloops residents will be going to the polls on April 4. The referendum will ask if people are in favour of the city borrowing up to $45 million to construct a performing arts centre.

Kamloops will once again have a referendum on a performing arts centre
Nov 5, 2019 2:34 PM

VIDEO: Check out this clip of the new Kamloops performing arts centre concept
Jan 9, 2019 9:24 AM
Comments
We welcome your feedback and encourage you to share your thoughts on this story. We ask that you be respectful of others and their points of view, refrain from personal attacks and stay on topic. To learn about our commenting policies and how we moderate, please read our Community Guidelines.