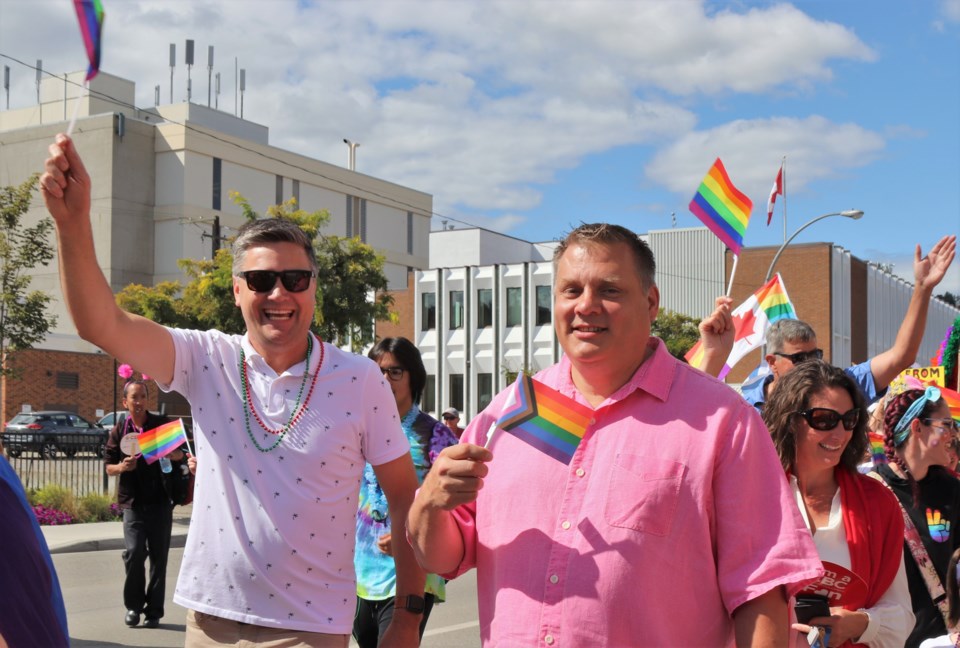 Todd Stone, left, and Peter Milobar at the Pride Parade. (via Brendan Kergin)

Milobar says the idea is akin to a newsletter for community members, but in audio form.

"It's very early days," Milobar says. "Our concept was really trying to use this as a communication vehicle to our constituents."

The podcast has a fairly simple form. Former Radio NL news anchor Bob Price guides the conversation, and asks questions, which Milobar and Stone weigh in on. The focus is on issues facing the North and South Thompson valleys, from a provincial perspective.

The first episode touched on a variety of subjects, including forestry, affordability, taxes and trade with China, though one theme was constant — criticism of the ruling government.

"I think it'll depend on the topics, but we are (the) opposition and we are trying to make sure people are understanding the issues we're hearing," Milobar says. "We can't pretend that those feelings and concerns don't exist."

Both are cabinet critics: Milobar for environment and climate change, Stone for housing and municipal affairs.

As far as Stone knows, no other B.C. politicians are regularly podcasting.

"In today's digital age, I think this is going to prove to be a really great way to connect with and communicate with our constituents," he says. "We'll see how it goes. ... We'll see where it takes us. I'm quite excited about it."

Money for the project is coming from the two constituency offices, Milobar says. So far, costs have been low.

"It's only been a couple hundred dollars I think at this point," he notes, comparing it to a mailer that some politicians send to homes in their riding. "It's all part of that communications package you try to put out to the constituents."

The inaugural episode was recorded in a private home studio, notes Stone, and required minimal editing.

"Literally, we sat down and we did the podcast in one take," he says.

Constituency offices are allowed to spend a certain amount of money each year (around $141,000 this year) on a variety of expenses like utilities, business equipment and communications (which would include creating a podcast).

Milobar came up with the podcast idea late last year as a new way to communicate with the community and suggested it to Stone. Both have done radio interviews for years, so they're comfortable speaking into a mic, Milobar tells KamloopsMatters.

Where it goes from here hasn't been specifically mapped out. There's room for evolution, Milobar says, with a second episode tentatively planned for mid-February, shortly after the provincial budget is released.

North To South is currently only on SoundCloud (found HERE). Milobar says the intention is to get it on more platforms.

Editor's note: After this story was published, it was brought to our attention that Green MLA Adam Olsen has a podcast called The Public Circle Podcast.

North Shore business association supports the Kamloops performing arts centre
Jan 13, 2020 1:58 PM
Comments
We welcome your feedback and encourage you to share your thoughts on this story. We ask that you be respectful of others and their points of view, refrain from personal attacks and stay on topic. To learn about our commenting policies and how we moderate, please read our Community Guidelines.