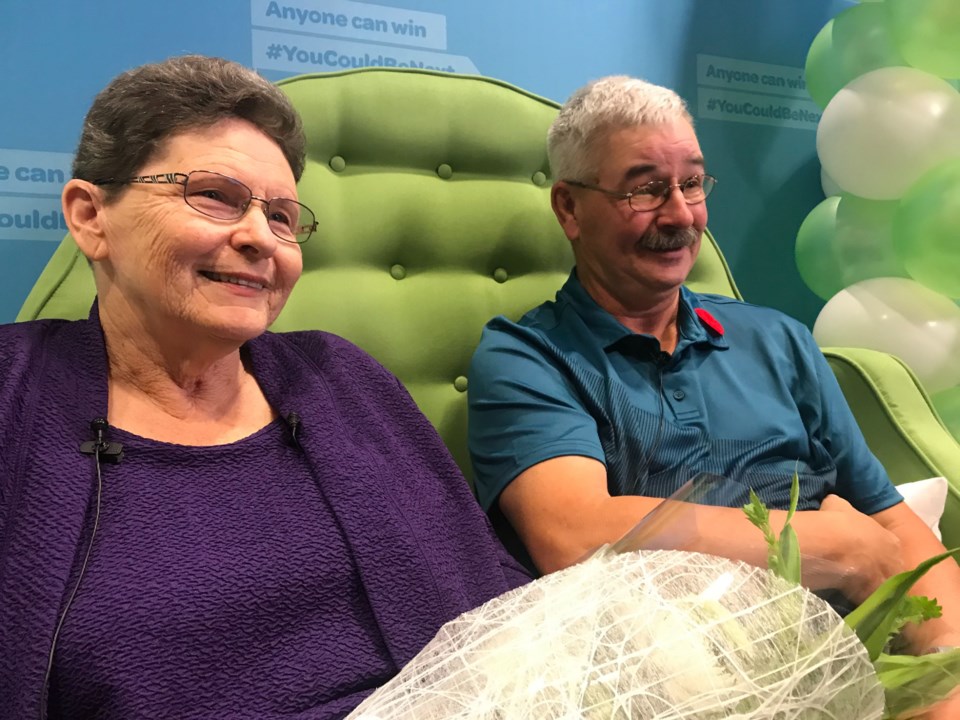 Ken and Susan Salter of Telkwa, B.C. Ken is a retired rail conductor and Susan retired from Service BC. (via Tereza Verenca)

Two retirees from northern B.C. were in Kamloops today (Nov. 8) to pick up a cool $20 million.

Telkwa's Ken and Susan Salter were at BCLC headquarters for the big cheque presentation, following their Lotto Max win in the Oct. 29 draw.

The couple, who has been married for 29 years, matched all seven numbers (their own) to win the jackpot.

Ken went to check his ticket, which he purchased in his hometown, on Halloween, around 4 p.m.

"The screen went fully black. It came up with, 'Winner — $20 million,' Ken says of the moment he found out.

Ken normally doesn't buy Lotto Max on Tuesdays, but he had a winning ticket for $20 from the previous Friday draw.

Susan, meanwhile, is currently recovering from knee surgery and says the winnings give her lots to look forward to. That includes building a new house — a rancher — on their current property in Telkwa, one that is all one level with no stairs.

They're not planning on leaving their village, they say, because "it's home."

The pair have seven children, 13 grandchildren and 11 great-grandchildren and say they'll help each one of them financially. Ken also plans to buy new vehicles and pay off the mortgages of three of his closest friends.

A trip to Europe is also on Susan's bucket list.

Ken adds, with a laugh, that Christmas should be "interesting."

Richmond's $60M lotto winner is a retired fisherman
Aug 21, 2019 1:45 PM
Comments
We welcome your feedback and encourage you to share your thoughts on this story. We ask that you be respectful of others and their points of view, refrain from personal attacks and stay on topic. To learn about our commenting policies and how we moderate, please read our Community Guidelines.