Opinion: The day a Kamloops elementary school burned down 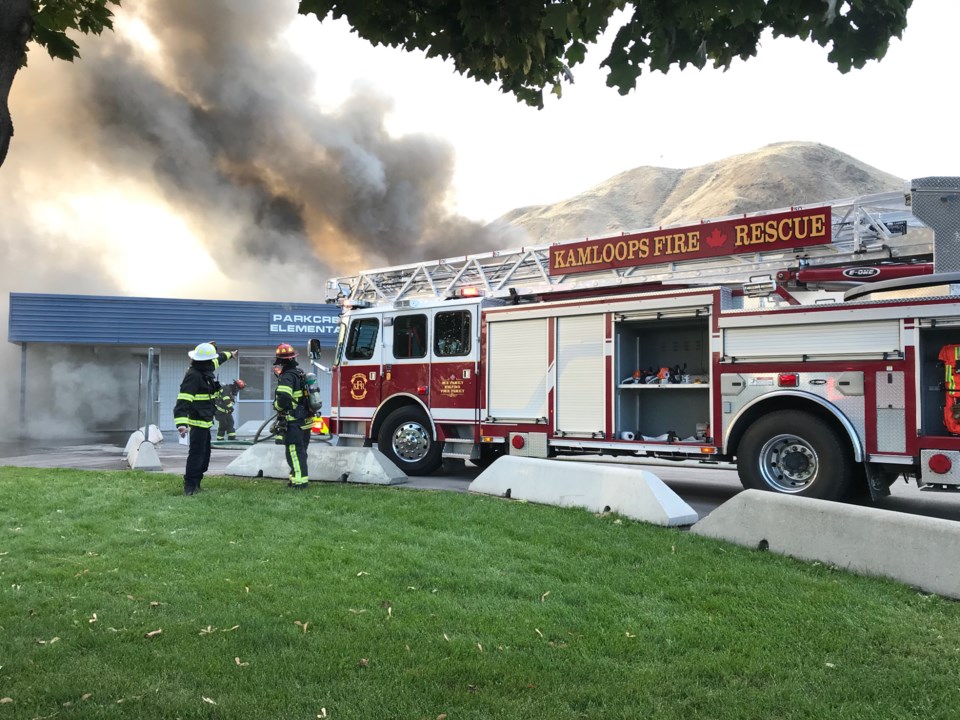 Kamloops Fire Rescue at the scene of Parkcrest Elementary on Sept. 5, 2019. (Tereza Verenca)

What is it about an elementary school that grabs at our hearts?

When you think about it, it’s really just a place where cinderblock meets vinyl floors, and where the walls (not the windows) tell you the season. Autumn leaves are replaced by jack-o-lanterns before the poppies bloom only to be replaced by snowmen (and women).

There are a lot of irritating things about elementary schools. Like parking, and the drop-off zones in which one parent always decides to stop and get out and mess up the whole system; like the lost and found bin that fills up the first week of school and gets progressively smellier over time.

And then there’s our little community school, composed of a maze of interconnected classrooms in which one could easily get turned around. Our school was built in the early 1970s and was trendy back then. An open concept school, it followed the principle that children would learn more effectively in open, creative spaces. They would learn at their own pace, and let their interests lead them. Teachers would work together alongside the students, and would learn from each other. It sure sounded like a great idea, but open concept = noisy and distracting, and before long the walls went back up, and our little school became super confusing, a maze of interconnected classrooms without hallways.

My old elementary school had high-tech machines that beat up chalkboard erasers. This school has Smart Boards and Chrome Books.

But there is still carpet time; children still sit criss-cross applesauce, hands in their laps. There are still stars on reading charts and cubbies with little shoes in them. There are still swing sets and hockey nets and a little room in the office that you sit in when your tummy aches.

Or at least there was, before it burned to the ground last week. 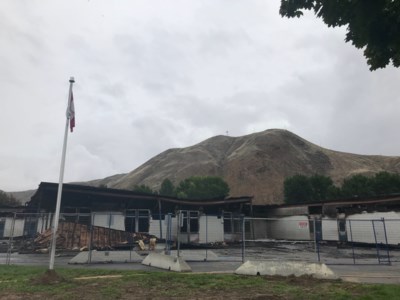 Parkcrest Elementary on Sept. 9, 2019. (via Brendan Kergin)
Driving by the other night on my way to a parent meeting to find out where my children would spend the next two years while their school is rebuilt, I stopped by our school and cried for a bit. Its roof had caved in, and it sat, crooked in the rain, like a hodgepodge of scattered blocks destroyed by an angry toddler.

I didn’t expect the sight would make me cry. Everyone got out safely. Nobody was injured. The building will rise again even better than before.

Everything will be OK.

But everything will be different, and so much has been lost. The fire even took away the smell of crayons, new shoes, old shoes, leftover lunches and library books.

My old school, Fraserview Elementary, still stands. Today if I wanted to, I could wander its perimeter, sit on a swing, or look through the window of what was once Mrs. Taylor’s Grade 3 class.

Today, 36 years after I began kindergarten I can close my eyes and see Mrs. Greenwood’s classroom perfectly, and remember her face as if no time had passed. If I needed to use the bathroom, I’d know exactly where to go, and I can picture the playground perfectly, as though I’d chipped my front tooth on the monkey bars yesterday.

I can smell the glazed donuts on hot lunch day, and I remember faking an injury in warm weather so the secretary would give me ice, which I’d eat and enjoy like it was the best dessert I’d ever tasted.

So this is why I cried sitting in front of our school and watching it through the windshield wipers. It’s not the building, it’s the memories. It’s the teachers and the friends. When you’re in it, when you are there, you have no idea that it’s all sinking in, that you’re becoming part of its history and that it is becoming part of your own.

My children will make new memories, but they’ll never forget the day that their school burned down.

Parkcrest Elementary in Kamloops, British Columbia, was destroyed by fire on Thursday, Sept. 5, 2019. The Parkcrest Parent Advisory Council is actively raising funds to replace many of the teaching materials lost in the fire. Please consider donating.

Danna Bach is a former journalist, mother of two little boys who attend Parkcrest, and communications professional. She writes Mind Candy, a blog which discusses motherhood, marriage and other things.

Parkcrest fire: TREC students could be moving to Happyvale
Sep 9, 2019 10:25 PM
Comments
We welcome your feedback and encourage you to share your thoughts on this story. We ask that you be respectful of others and their points of view, refrain from personal attacks and stay on topic. To learn about our commenting policies and how we moderate, please read our Community Guidelines.