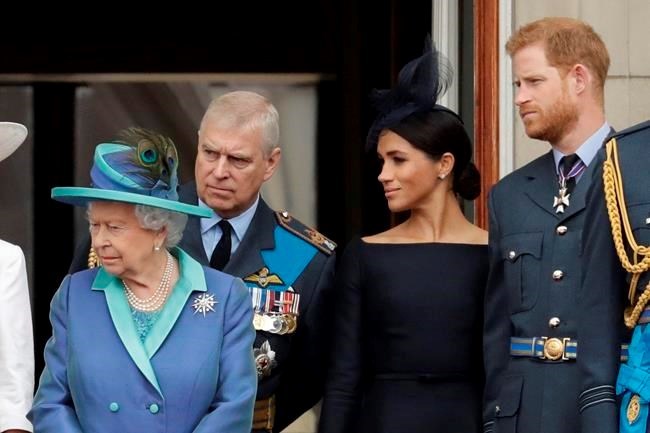 The Queen, alongside Meghan and Harry. (via Canadian Press)

Queen Elizabeth II has agreed to grant Prince Harry and Meghan their wish for a more independent life that will see them move part-time to Canada.

The British monarch says her family had "very constructive" discussions on the future of her grandson and his family.

Harry and Meghan are also known as the Duke and Duchess of Sussex.

She says there will be a transition period in which the Sussexes will spend time in Canada and the UK.

A statement from Her Majesty The Queen. https://t.co/IVSyfeojqk

Meghan is already in Canada with the couple's baby son, Archie.

Earlier Monday Princes William and Harry slammed a newspaper report describing a severe strain in their relationship, calling the story offensive and potentially harmful as they embark on talks regarding the future of the British monarchy.

In a six-sentence statement that mentioned the word "family" six times, the queen said that "though we would have preferred them to remain full-time working Members of the Royal Family, we respect and understand their wish to live a more independent life as a family while remaining a valued part of my family."

"These are complex matters for my family to resolve, and there is some more work to be done, but I have asked for final decisions to be reached in the coming days," the Queen said.

Opinion: What if you spotted a prince? 'I'd do nothing'
Dec 28, 2019 8:05 AM
Comments
We welcome your feedback and encourage you to share your thoughts on this story. We ask that you be respectful of others and their points of view, refrain from personal attacks and stay on topic. To learn about our commenting policies and how we moderate, please read our Community Guidelines.