A seniors' home in Kamloops is redefining how it treats the death of a resident.

For the last year-and-a-half, Pine Grove Care Centre has been holding a special ceremony called an "honour guard" to say farewell.

When someone passes at the McGowan Avenue facility, a public announcement is made to staff and residents.

"We used to run (the deceased) out the back door. Nobody can know that you passed away," Wendy Romanowski, the care home's recreation manager, tells KamloopsMatters. "Now, we say, 'You walked in the front door. That's exactly how you should go out of this home.'"

During the honour guard, staff and residents gather in the dining room area. The funeral director then leads a procession — with the body and the deceased's family following — around the room. "Amazing Grace" plays in the background. If it's a veteran, it's "The Last Post."

"There are lots of tears and hugs," says Romanowski. "It's just our way of honouring them. ... Everybody takes that moment to reflect on that person's life with family, and then we (staff) follow them out the door." 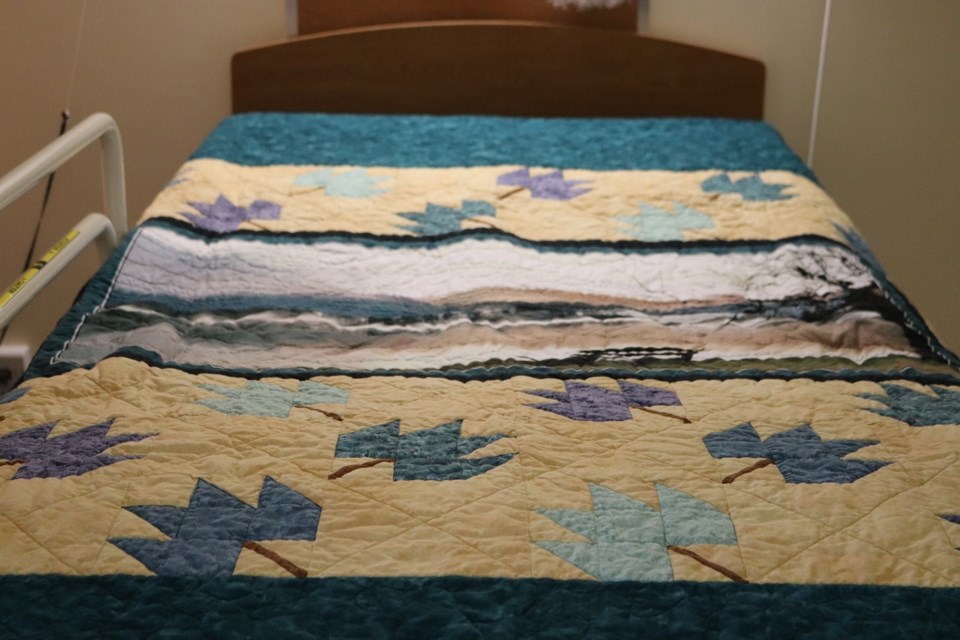 The quilt. (via Tereza Verenca)

The body is covered by a special blanket, made by the quilting group at the Hills of Peace Lutheran Church. The design is of Riverside Park.

"It's just a peaceful blanket," says Romanowski, adding the quilt gets returned to the care home after the procession.

Romanowski estimates at least 50 residents have gone through an honour guard (consent has to be given first).

Asked where the idea to have a procession came from, she says it was a directive from head office at Park Place Seniors Living. (Pine Grove Care Centre is a publicly funded, one-storey residence with 75 beds.)

"The first family we did it with... they said, 'No, no, Wendy. We don’t like that idea.' (The wife) phoned me at home that night and said, 'It was the most beautiful sendoff. I just felt the love from everybody and I know how much my husband was loved.'"

The staff at Pine Grove also place the resident's picture on a table at the entranceway. A light is lit until after the funeral. If no funeral, the light stays on for about two weeks.

Following the resident's death, a piece of paper with the words "Farewell My Friend" is hung on their door. Staff and neighbours are invited to write their condolences and share stories.

"I take those little notes and I make a story about their life here at Pine Grove," says Romanowski.

The resident's story is then shared at a celebration of life event, which takes place every three months.

"We invite family members and friends... We give the family roses. A lot of the times, residents have become friends, so they get a rose too."

To top it all off, Romanowski also sends the family a sympathy card.

Kenzie and her sister didn't attend the honour guard, she says, because it would have been too hard.

"We couldn't partake in it, but we knew that dad would have wanted something like that. It's a chance for staff to honour the person, for the residents to honour the person and say goodbye. I thought it's such a beautiful way to leave the building," she says. "I think it's just amazing. It's a part of life that no one really acknowledges."

Kenzie, a nurse at Royal Inland Hospital, adds she'd like to see other seniors' homes adopt a similar policy.

As far as Romanowski knows, Pine Grove is the only care facility in the city that does this kind of ceremony.

Quadruple birthday bash 100 years in the making at B.C. retirement home
Oct 19, 2019 6:05 PM
Comments
We welcome your feedback and encourage you to share your thoughts on this story. We ask that you be respectful of others and their points of view, refrain from personal attacks and stay on topic. To learn about our commenting policies and how we moderate, please read our Community Guidelines.