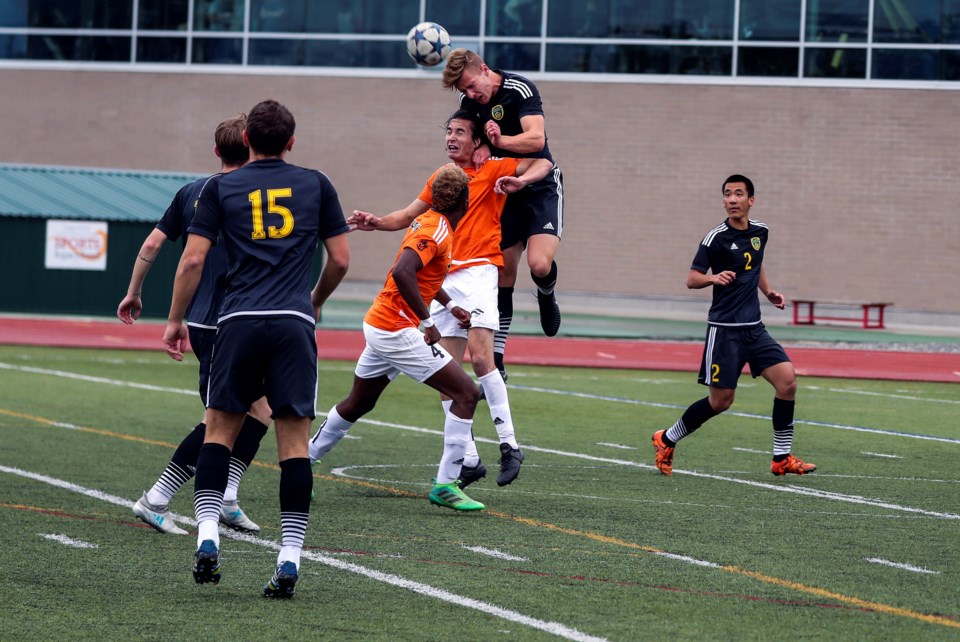 James Fraser fights with Noah Cunningham to head a ball in TRU's Friday night game against the Alberta Golden Bears. (via Andrew Snucins)

James Fraser had a hat trick Saturday afternoon (Sept 22) to lead the TRU WolfPack men's soccer team to a 4-0 win – just their second of the season – over the Mount Royal Cougars.

The game was also the team's second of this weekend's homestand. On Friday (Sept. 21), they dropped a 1-0 decision to unbeaten the University of Alberta Golden Bears.

Fraser got the WolfPack on the board in the 21st minute, directing a pass from Koffi Nyavor toward the net before scoring on his own rebound. He added to that total in the second half, scoring on a nifty left-footed shot from the top of the 18-yard box.

His final goal came on a penalty kick in the 77th minute. But just because Fraser was done scoring, doesn't mean the rest of the team was. Jason Staiger potted one in added time off a nice feed from Justin Donaldson to close out a dominant day for TRU.

The WolfPack had 11 shots on net to the Cougars' one. Jackson Gardner got the win in an uneventful day in net for TRU.

The weekend split leaves TRU with a 2-4-2 record and still at the basement of the Pacific Division. Their next game is at the Trinity Western Spartans on Sept. 28. The WolfPack don't have another home game until the University of Northern B.C. Timberwolves visit on Oct. 6.