Commercial redevelopment in the area is 'likely,' according to the executive director of the North Shore Business Improvement Association
0
Oct 9, 2018 11:11 AM By: Brendan Kergin 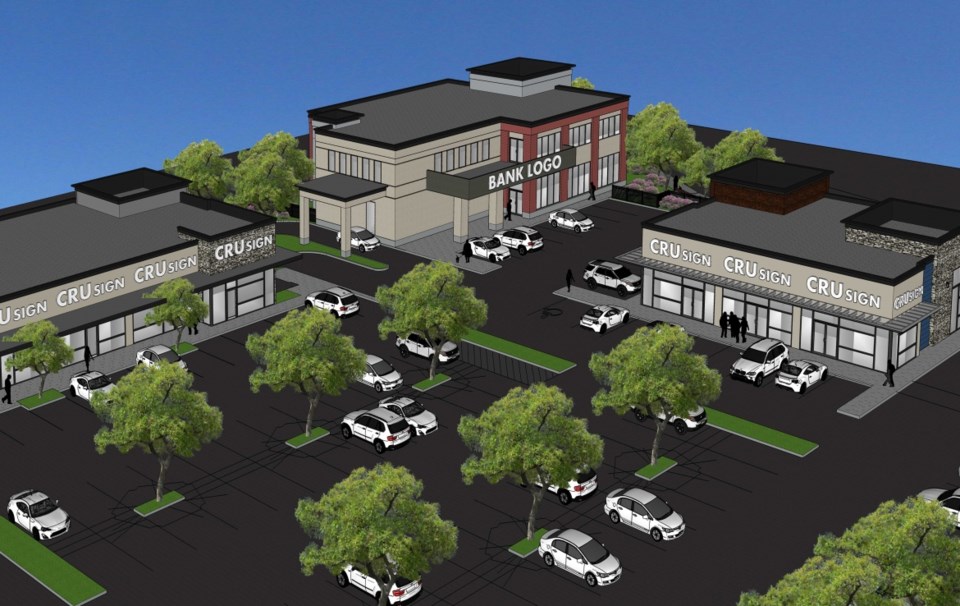 An architect's drawing shows what may be built. (via Lee and Associates)

A Vancouver-based development firm is advertising a "new retail opportunity" where the Penny Pinchers thrift store currently stands on the North Shore.

Lee and Associates currently have a four-building, 23,000-square-foot project drawing on its website, showing a massive redevelopment on one of the most visible corners in Kamloops, at Tranquille Road and Fortune Drive. The write-up about the location highlights how busy the intersection is, how close it is to the airport and the fact it'd be good for drive-thrus.

Jeremy Heighton, executive director of the North Shore Business Improvement Association, tells KamloopsMatters he's not been briefed on the details of the project, but that it looks like a prospectus for a potential commercial development.

"It's about 'this is what we foresee,'" he says. "If they get more than a certain percentage filled, then they'll move forward with the project."

"It's a fairly standard process down on the Coast."

There are 11 units shown on the plan, including one likely for a bank.

Heighton points out that the Penny Pinchers lease is ongoing. He believes it runs for at least one more year. After that, though, he says it's likely redevelopment of some sort will happen.

"We all know that site is in need of something," he says. "Once the current lease expires, they're going to do something."

Overall, there seems to be activity brewing on the North Shore, according to Heighton.

"The time is right for this development," he says. "We only have nine or 10 storefronts open on The Shore."

He says he's heard of other developments in negotiations as well for the area, but nothing complete yet.

"We have a revitalization process that's creating its own momentum," he says. "I have no doubt there's going to be lots of jobs along this corridor for the next 10 years."

So many, in fact, he says it may create an issue as a labour shortage looms.

"The labour issue is now, and will continue to be a challenge," he says. "The cost is high when economy booms."

The Lee and Associates webpage for the project estimates the project's time of opening as spring of 2020.

Lee and Associates' Sean Ogilvie, who's dealing with leasing for the property, says that timetable might not be as viable as it was when the plans were first drafted, but it's still possible. The developer is still in discussions as to what will happen next with the location, but no permits have been issued.

"Where we're at is, we're not on common ground with the city," he says. "The developer has been in discussions with the city for a long time."

The developer does want to see something new on that spot, though, according to Ogilvie. He says, currently, no one sees the site being used properly.

— This story was updated at 3 p.m. on Oct. 9 to include comments from Sean Ogilvie.