Vancouver ranked second most bike friendly city in Canada — Kamloops, not so much 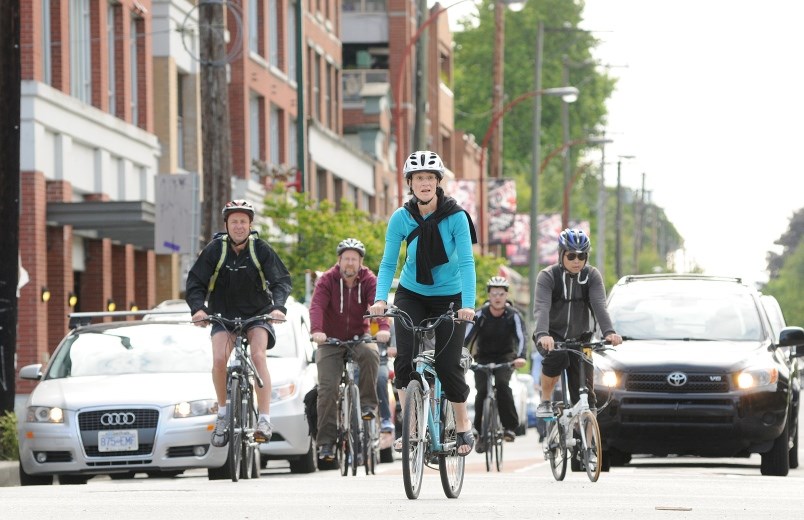 Vancouver is the second most bike-friendly city in Canada, according to a new ranking system created by a U.S. real estate company. (via Dan Toulgoet)

Vancouver is the second most bike-friendly city in Canada, according to a ranking system created by a U.S. real estate company. It has a score of 79 just one point behind Victoria's 80, while Kamloops is sitting at just 26.

Redfin, a technology-powered real estate brokerage based in Seattle, used their Bike Score tool for the first time ever to assess how bike friendly Canadian cities are, and, unsurprisingly, Vancouver was near the top of the list.

The scores are based on several factors including access to bicycle lanes, road connectivity and hilliness.

Scores from 90 to 100 indicate “daily errands can be accomplished on a bike,” 70 to 89 means “biking is convenient for most trips,” while 50 to 69 means the city is “bikeable” with some bike infrastructure.

Anything lower than 49 means the city has minimal bike infrastructure.

Victoria, Vancouver and Montréal came out as the top three most bike-friendly cities in Canada, with Bike Scores of 80, 79 and 73, respectively. While Richmond just snuck in to the top 10 list, coming in at number 10, with a score of 61.

Vancouver’s Bike Score was boosted by its extensive bike-path infrastructure that spans more than 300 kilometres and makes cycling a popular and easy choice for both Vancouverites and visitors.

Redfin highlighted that more and more Vancouverites have been choosing to cycle in recent years, stating that more than seven per cent of all trips taken in Vancouver in 2018 were by bike, which is up from 4.4 per cent in 2013.

“Vancouver has gone through significant reconstruction to make it as bike-friendly as possible over the last decade,” said Redfin agent Brooks Findlay.

“The bridges have been retrofitted with bike lanes and it’s almost impossible to find a street downtown that’s not marked with bike routes.

“For many of my home-buying clients, living close to both transit and bike lanes is a priority. The number of people who commute by bike has gone up noticeably over the last several years, and tourists prefer to see the city by bike, especially on sunny days.”

Victoria and Vancouver have similar scores to Minneapolis (84) and Portland (82) the most bikeable cities in the U.S.

Redfin has Bike Score information for more than 300 cities in Canada.

— With files from Valerie Leung/Richmond New