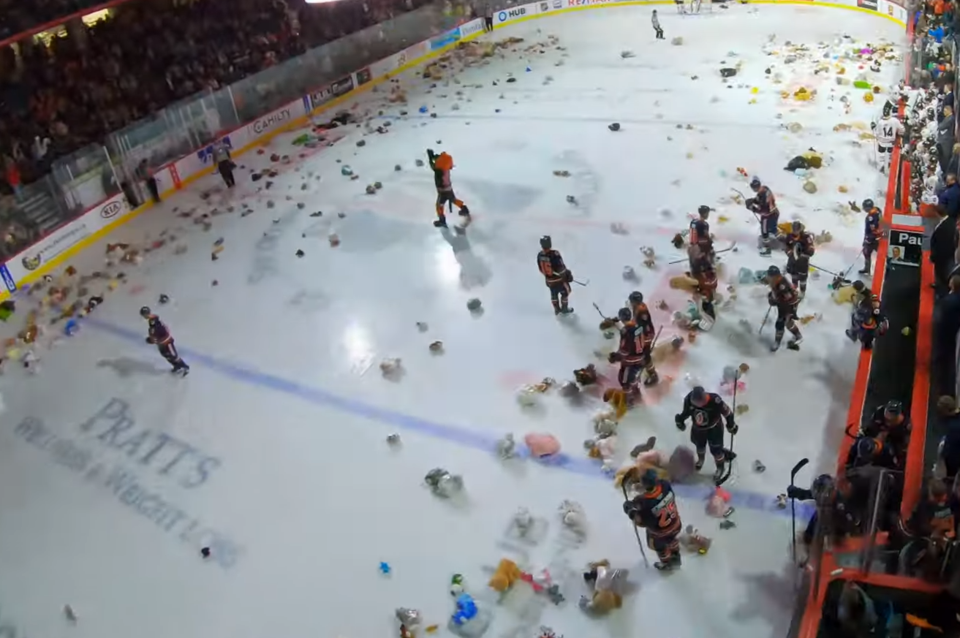 The 2019 Teddy Bear Toss, from above. (via Mark Betuzzi/YouTube)

The Kamloops Blazers held their annual teddy bear toss this past weekend, a tradition that stretches back to the early '90s.

One thing they didn't have back then was blimp footage of the moment.

Mark Betuzzi has uploaded footage from the Nov. 30 game with a unique angle: stuffed animals raining down on the players.

(In case you were wondering, the Blazers beat the Portland Winterhawks 4-1.)

Additionally, 655 articles of winter clothing were donated, including toques, scarves and pairs of gloves.

O'Donovan says this year was higher than last year, in terms of the number of teddy bears.

"It was a good success this year," he tells KamloopsMatters.

All the stuffed animals stick around the Kamloops area.

"They go to a lot of different local places; the hospital, the Hamlets were here today," O'Donovan says.

The annual event, which started in the Tournament Capital in 1993, has spread across the continent. Hershey, Pennsylvania collected 45,000 teddy bears this year.

For a more traditional view of the local toss, check out the video below from the WHL.

PHOTOS: Teddies rain down as Kamloops Blazers 'beary' Portland
Nov 30, 2019 10:45 PM
Comments
We welcome your feedback and encourage you to share your thoughts on this story. We ask that you be respectful of others and their points of view, refrain from personal attacks and stay on topic. To learn about our commenting policies and how we moderate, please read our Community Guidelines.