What's falling now? We asked an expert about precipitation around Kamloops 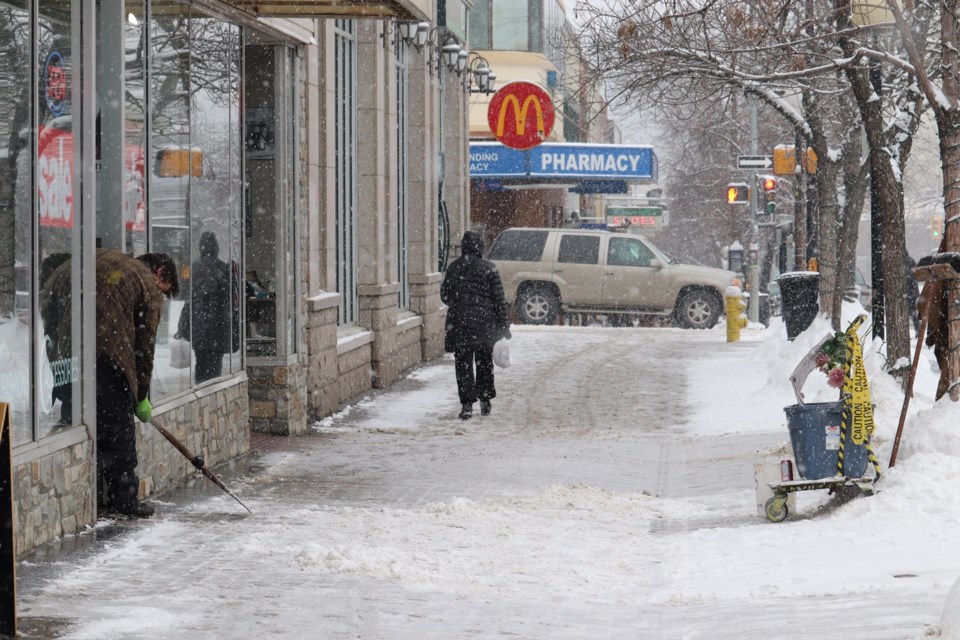 After an Environment Canada forecast for Kamloops called for "ice pellets," we had to look up what that meant.

That got us thinking. What's the difference between ice pellets and hail? What about drizzle and rain?

We called up our friends at Environment Canada to get the 411 on their weather lingo.

It turns out, they use A LOT of different terminologies. Each one is very precise when it comes to meaning. And it's important not to mix them up.

Terri Lang, a meteorologist with Environment Canada, explained to us the difference between ice pellets, freezing rain and more.

Here are a few terms to keep in mind (taken from Environment Canada's online manual).

Precipitation of transparent or translucent pellets of ice that are spherical or irregular, rarely conical, having a diameter of 5 mm or less, states the manual.

"When ice pellets occur that means higher up in the atmosphere it's been warm enough to melt whatever is falling," Lang says.

There are two categories for pellets:

Lang says they rely on a warm layer of air close to the surface of the earth, but it's still below 0 C at ground level, freezing the falling H2O before it hits the ground.

"It's what we call an inversion, meaning that there's warm air on top of cold air, which is not the usual order," Lang says.

Ice pellets are usually around the size of a pea.

Related to ice pellets, freezing rain is one of the more dangerous forms of precipitation, she says. Freezing rain falls as rain, but freezes on contact.

"As soon as it hits the road it turns the road into a sheet of ice, so even in small amounts it can be dangerous," she adds, describing it as "very pretty, but very, very dangerous."

In this case, the inversion needs to create a situation where the rain won't freeze while falling, but it needs to be cold enough when it makes contact with something that it freezes essentially immediately. Ice pellets are essentially freezing rain that freezes before hitting the ground.

"As soon as we see that there are ice pellets we know there's a chance of freezing rain," Lang says. "Up in the atmosphere there's probably freezing rain and we don't want planes flying through that."

If either are spotted, planes are warned. Freezing rain is also bad for electrical lines; the infamous 1998 ice storm in Eastern Canada was essentially large amounts of freezing rain falling on electrical lines, where it would build up and cause the lines to break (or tree branches above). It's more common in Eastern Canada, but does happen in B.C., and appears to be happening more often.

"It gloms on to trees or cars or powerlines," Lang says.

She notes that due to the physics of water, it can actually stay liquid while falling at temperatures as low as -25 C, only freezing once the surface tension is broken. Normally freezing rain won't fall at temperatures past -10 C, though.

A sort of little sibling to freezing rain is freezing drizzle. Drizzle is moisture in the air that appears suspended and is too small to distinguish individual droplets with the naked eye.

"Freezing drizzle means there are drops floating around in the air; all this liquid is floating around but the temperature is below freezing," Lang explains. "As soon as the drops run into something solid it freezes instantly to it."

Hail is similar to ice pellets in that they're both frozen balls of ice, but hail is a more complex precipitation

The manual describes them as "small balls or pieces of ice (hailstones) with a diameter ranging from 5 mm to 50 mm or sometimes more, and which fall either separately or fused into irregular lumps. Hailstones are composed almost exclusively of transparent ice, or of a series of transparent layers of ice at least 1 mm in thickness, alternating with translucent layers."

That makes it the onion, or Shrek, in the world of water falling from the sky.

"Hail would be your onions," Lang says. "Generally if you cut a hailstone open it'd be like a jawbreaker."

Hail is often associated with thunderstorms, and for good reason. The air currents provide the precise environment needed for hail to form.

"They start out as a raindrop, but they form in thunderstorms which have lots of winds inside of them," Lang explains. "These drops get thrown to the top of the cloud, freeze, fall, and catch another layer of rain."

"Maybe the winds catch them again and throw them up again. This can go on for quite some time."

So the stronger the thunderstorm, the larger the hail can be.

Not all hail is spherical; sometimes, being tossed around in a storm, it collides with other hailstones, causing to smash apart and reform in jagged forms.

"It's quite a chaotic process," Lang says.

Once the air is too heavy to be kept up by the wind, it falls.

"A fall of non-branched ice crystals, in the form of needles, columns or plates, often so tiny that they seem to be suspended in the air," states the manual. "The crystals are visible mainly when they glitter in the sunshine; they may then produce a luminous pillar or other halo."

These are crystals that usually fall when there's no cloud in the sky. Instead, they form from the ambient moisture in the area, which means they only occur in very cold conditions, Lang says.

"You can see something falling out of the sky but there's no cloud," she adds.

Ice crystals are the cause of some neat visual phenomena, like sun dogs, where they catch the suns rays and create a halo around it.

As most know, the warmer it is, the larger the flakes are. As they fall (if it's close to 0 C), they glom on to each other, to create larger flakes.

Lang says snow is complex enough that scientists are still studying it and learning more.

These two are quite similar. Grains are the smaller, forming as "very small white and opaque grains of ice. These grains are fairly flat or elongated; their diameter is generally less than 1 mm,"  according to the manual.

Meanwhile, pellets are "precipitation of white and opaque particles of ice; these ice particles are either spherical or conical; their diameter is about 2 mm to 5 mm. Snow pellets are brittle and easily crushed; when they fall on hard ground, they bounce and often break up," states the manual.

Lang is fascinated by precipitation and says we're lucky to live in a country with such a wide variety of weather.

"I always encourage people to be curious about precipitation," she says. "We have the whole range of precipitation; ice crystals to giant hail. Not every country has that."

"I think we're privileged to see all of that and there's such beauty in it."

Despite arctic front, January an average month for Kamloops
Feb 4, 2020 1:35 PM
Comments
We welcome your feedback and encourage you to share your thoughts on this story. We ask that you be respectful of others and their points of view, refrain from personal attacks and stay on topic. To learn about our commenting policies and how we moderate, please read our Community Guidelines.