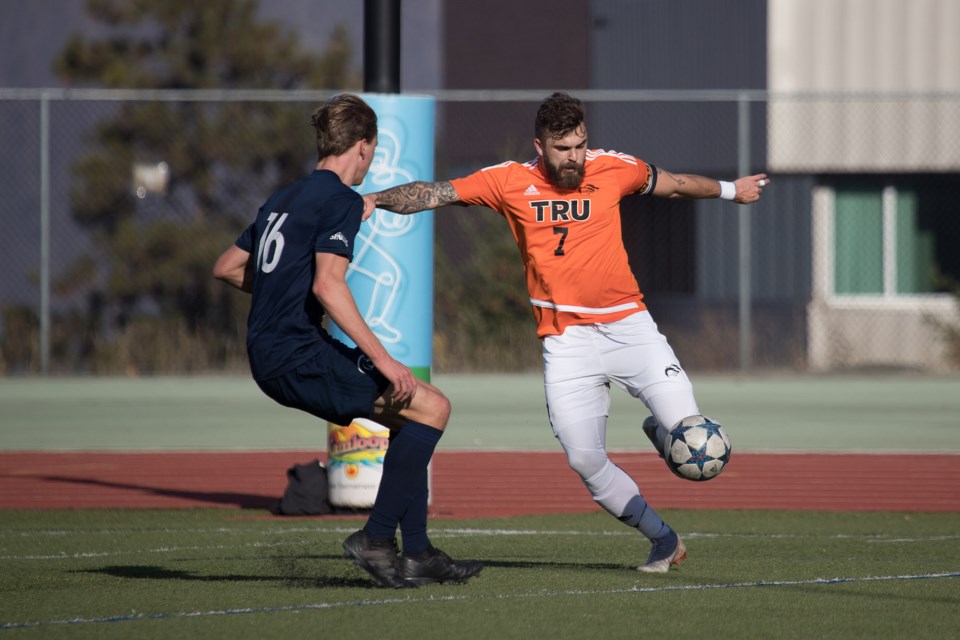 Justin Donaldson plays a ball off the bounce in Wednesday's 2-1 win over Trinity Western. (via Andrew Snucins)

The Thompson Rivers men's soccer team enters the final weekend with a shred of hope following Wednesday's 2-1 victory over the Trinity Western Spartans.

The game, which was rescheduled from Aug. 26 due to wildfire smoke, vaulted the WolfPack past the Victoria Vikes for fifth in the Pacific Division. Only the top four teams will qualify for the postseason, meaning TRU will still need to win a pair of home games this weekend (and get a little help) in order to pass the fourth-place UFV Cascades.

But yesterday, when the team needed it most, Joshua Banton found the back of the net in the 91st minute to break a 1-1 tie.

"It was one of those games where finally we got a couple of things going our way at the end of the game," said head coach John Antulov in a press release from TRU's sports information department. "It came down to the guys' battle, effort, work rate, mindset and they did the right things to gut it out. I thought in previous games we were playing really well but not getting the breaks. It was nice to see things going our way. The guys haven’t changed all year. They have been fighting. Today though, things went our way.”

Mitchell Popadynetz had the other goal for TRU.

The WolfPack welcome Victoria to Hillside Stadium on Oct. 20, and the UBC Thunderbirds on Oct. 21. Both games start at 1 p.m. The Sunday game will also be a chance to honour graduating players Thomas Lantmeeters, Finlay McPhie, Jason Staiger and Popadynetz.

The women's soccer team is also fighting for their playoff lives with two games coming on the road in their final weekend. They play UNBC in Prince George tomorrow and finish the season at MacEwan in Edmonton on Oct. 21. They're currently trailing UBC Okanagan for the final playoff spot by one point.