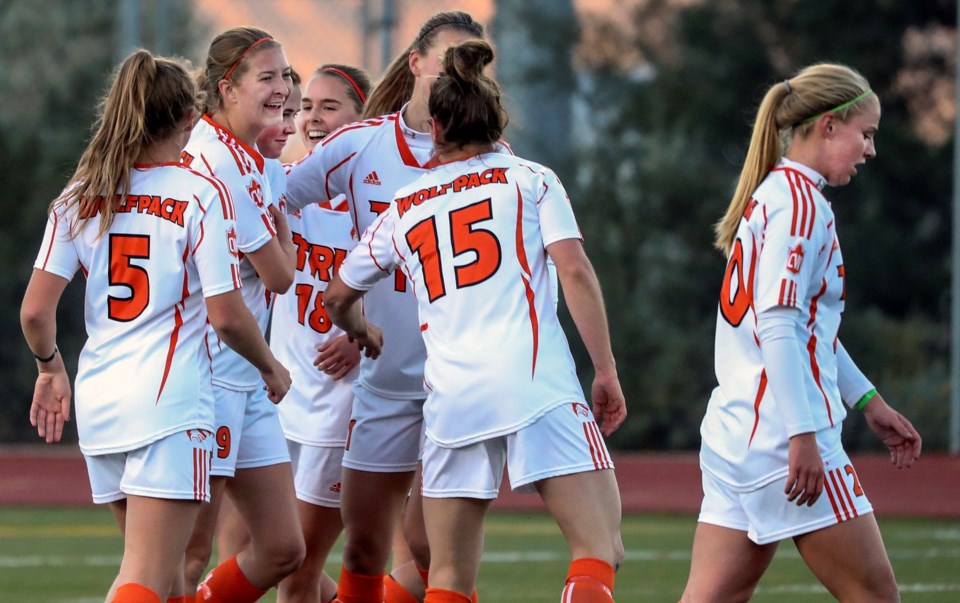 The WolfPack celebrate their second goal of the game. (via Jonathan Amponsah/TRU Athletics)

The TRU women's soccer team got back in the win column Thursday night (Oct. 4) with a 2-0 win over the UBC Okanagan Heat.

Chantal Gammie powered the offence, scoring both goals on the night. Her first goal, that came just seven minutes into the match, ended a scoreless streak for the WolfPack that dated back to Sept. 16.

"It’s such a relief to finally get a goal in the net," said Gammie, according to a press release from TRU's sports information department. "That goal really gave us momentum. This win was very big emotional. Everyone really needed this."

The second goal came in the 49th minute. Both were assisted by Marlie Rittinger.

The WolfPack had nine shots on goal to the Heat's two. Danielle Robertson got the clean sheet in goal for TRU.

The win was just their second of the season, and with five games remaining on the year, they still sit at the bottom Pacific Division with a 2-7 record.

Their next game is tomorrow (Oct. 6), a rematch against the Heat in Kelowna that starts at 1 p.m. The next home game is Oct. 13.