"Martin is able to play the game with pace,” said Blazers GM Matt Bardsley in a press release. “He has good puck skills and has shown the ability to finish at all levels which were evident as he was a key contributor to his Czech Republic U17 team at the World U17 Challenge." 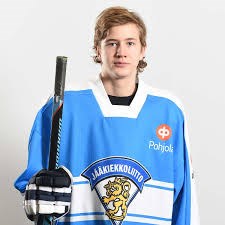 Joonas Sillanpaa. (via Kamloops Blazers)
Standing at 6'5", Sillanpaa will bring a long reach to the Blazers back end. Taken with the 74th pick, the 17-year-old defenceman played this past season with HIFK U18 and U20 teams in Helsinki, Finland, where he had two goals and eight points in 43 games. Sillanpaa was born in Göteborg, Sweden, but is of Finnish nationality. His father Teemu played professional hockey in Europe.

"Joonas is a big rangy defenseman who can contribute in all areas of the ice," Barsdley said in the release. "He displays good offensive instincts along with good mobility while showing a willingness to engage physically."

Makim Cajkovic was the first selection in the Import Draft. A total of 77 players were chosen from across 12 different countries, with the Czech Republic having 16 players taken.

The Blazers training camp begins at the end of August, and the season opener is Sept. 21.

Freeze Athletics sending another team to international cheerleading championship
Jan 25, 2020 8:05 AM
Comments
We welcome your feedback and encourage you to share your thoughts on this story. We ask that you be respectful of others and their points of view, refrain from personal attacks and stay on topic. To learn about our commenting policies and how we moderate, please read our Community Guidelines.