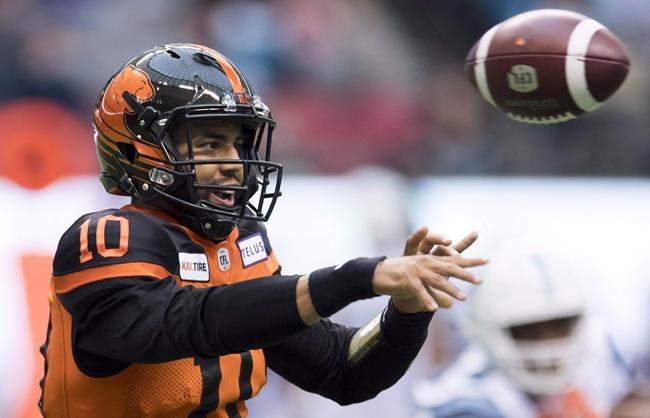 Jennings worked with the starting offence at Tuesday's practice. Afterwards, head coach Rick Campbell said Jennings will be under centre versus Winnipeg as incumbent Dominique Davis has an unspecified injury.

"We expect him back sooner than later but he's not going to be able to play this week."

Winnipeg (4-0) is the CFL's lone unbeaten team and earned a 29-14 road victory over Ottawa on July 5. The Redblacks (2-2) come into the game having dropped two straight, including a 36-19 loss to the Montreal Alouettes on Saturday at TD Place.

The start will be Jennings' first with Ottawa. He joined the Redblacks as a free agent after four seasons with B.C. In 2016, Jennings threw for 5,226 yards and 27 TDs — both career highs — with the Lions.

"They won a lot of games with him," Campbell said of Jennings. "He's athletic, he throws really well.

"I like his demeanour, he's got a calm demeanour about him. I'm looking forward to seeing him play. We said right from the beginning we thought we could win with both of these guys and that's why we signed both of them."

Davis opened the season as Ottawa's starter following the off-season departure of Trevor Harris to the Edmonton Eskimos. Davis boasts a 66-per-cent completion percentage with 1,132 passing yards but has more than twice as many interceptions (seven) as TD strikes (three).

It was a mixed bag for Davis in Ottawa's season-opening 32-28 road win over Calgary on June 15. He had four interceptions but also ran for three touchdowns.

Campbell said Davis will make the trip to Manitoba with the Redblacks and could dress for Friday's game. If not, then Campbell added Ottawa is prepared to go with just Jennings and rookie William Arndt.

"The thing I like about both Dom, Jonathan and Will is that they all prepare like they're playing," Campbell said. "They all help each other.

"It's a very healthy quarterback room which is good. It's not like this is a drastic shift. Obviously the other guys is going to be playing but they all carry themselves in the same way."

Note to readers: This is a corrected story. The Winnipeg Blue Bombers were incorrectly listed as the home team for their most recent game against the Ottawa Redblacks in a previous version, and had the incorrect spelling of Jonathon Jennings' first name

Downtown Tokyo's homeless fear removal ahead of Olympics
Jan 23, 2020 3:41 AM
Commemorative stamp pays tribute to all-black hockey league in the Maritimes
Jan 23, 2020 1:00 AM
Wednesday's Games
Jan 22, 2020 10:38 PM
Comments
We welcome your feedback and encourage you to share your thoughts on this story. We ask that you be respectful of others and their points of view, refrain from personal attacks and stay on topic. To learn about our commenting policies and how we moderate, please read our Community Guidelines.