TORONTO — Nick Nurse is going to prepare Canada's men's basketball team for a long haul. A group of 29 players — including 17 NBAers — were invited to Canada's training camp on Tuesday ahead of the FIBA World Cup.
0
Jul 16, 2019 3:36 PM By: Canadian Press 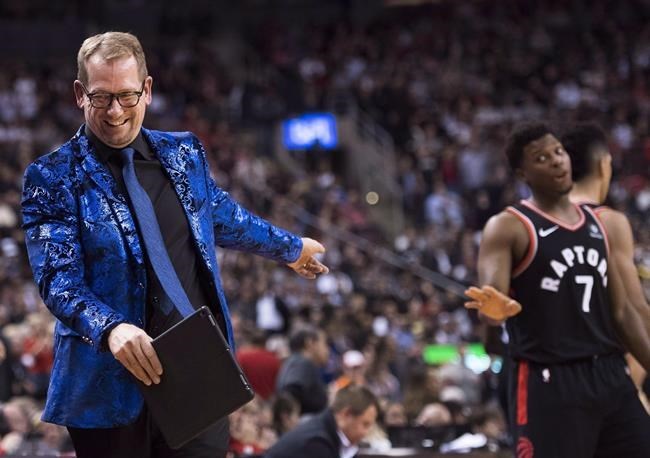 A group of 29 players — including 17 NBAers — were invited to Canada's training camp on Tuesday ahead of the FIBA World Cup. The Canadians will play a pair of exhibition games in Toronto and Winnipeg before five more games in Australia before travelling to China for the international tournament that will be held from Aug. 31 to Sept. 15.

Nurse, fresh off of an NBA championship with the Toronto Raptors, wants Canada to be in the final.

"When you start doing those things who knows where you can go. But my objective is to win."

Rowan Barrett, Canada's general manager of men's high performance teams, said depth will be one of the critical components of his roster. Canada had the second-most players in the NBA to start the 2018 season behind only the United States.

That number is expected to grow this fall after six Canadians were selected in the NBA draft, a new record for most players picked from any country outside the U.S. in a single draft.

Playing in the World Cup amounts to a six-week commitment from players, with Canada opening its two-game exhibition series against Nigeria in Toronto on Aug. 7 and then playing in Winnipeg on Aug. 9.

After those two games the Canadians will travel to Australia for a five-game exhibition series against Australia (Aug. 16-17), New Zealand (Aug. 20-21) and the Americans (Aug. 26) before heading to China for the tournament itself.

Basketball Canada said a finalized list of training camp attendees will be announced prior to the start of camp.

"I think to give our team the best chance that we have to be successful we need to have those commitments and have the players in," said Barrett. "If you're in, you need to show up on that first day and let's get going, let's get started."

Jamal Murray is the biggest name invited to play for Canada at the tournament.

He averaged 18.2 points and 4.8 rebounds for Denver this past season, guiding the upstart Nuggets to within a game of the Western Conference finals. The 22-year-old from Kitchener, Ont., agreed to a five-year, US$170 million contract extension with Denver on July 1, the richest deal for a Canadian player in NBA history.

R.J. Barrett, who was drafted third overall by the New York Knicks this summer, is also on the list of invitees. The son of Rowan Barrett and godson of Canadian basketball legend Steve Nash, the younger Barrett averaged 22.6 points, 7.6 rebounds and 4.3 assists for Duke University last season.

Former No.1 draft pick Andrew Wiggins was not invited to the camp. He averaged 18.1 points, 4.8 rebounds and 2.5 assists per game last season with the Minnesota Timberwolves.

"We've had some conversations with him. At the end, it's come out to him not feeling like this was the right time for him," said Barrett. "We have to respect that and from now we'll move forward and we'll focus on, and respect, all the other players that have decided to play and focus on them moving forward."

Things won't get any easier at the World Cup, with Canada in a group with Australia, Lithuania, and Senegal, considered by many to be the toughest group in the tournament.

"I know that we're playing some physical teams," said Nurse who was an assistant coach for Great Britain from 2009-12, including the 2012 London Olympics. "I've coached many times against Lithuania in the past and a few times against Australia. Their trademark is physicality. We're going to have to understand that going in. We have to be ready and to play through some physicality"

Larry Walker Sr. proud his son voted into National Baseball Hall of Fame
Jan 22, 2020 1:00 AM
Canadian Milos Raonic advances to third round at Australian Open
Jan 21, 2020 10:45 PM
Tuesday's Games
Jan 21, 2020 9:42 PM
Comments
We welcome your feedback and encourage you to share your thoughts on this story. We ask that you be respectful of others and their points of view, refrain from personal attacks and stay on topic. To learn about our commenting policies and how we moderate, please read our Community Guidelines.