TORONTO — The Toronto Raptors' seasoned play-by-play announcer is winning widespread praise for calming a jittery crowd after gunfire broke out at a jammed Nathan Phillips Square, convincing fans to remain strong and "stay together.
0
Jun 17, 2019 4:46 PM By: Canadian Press 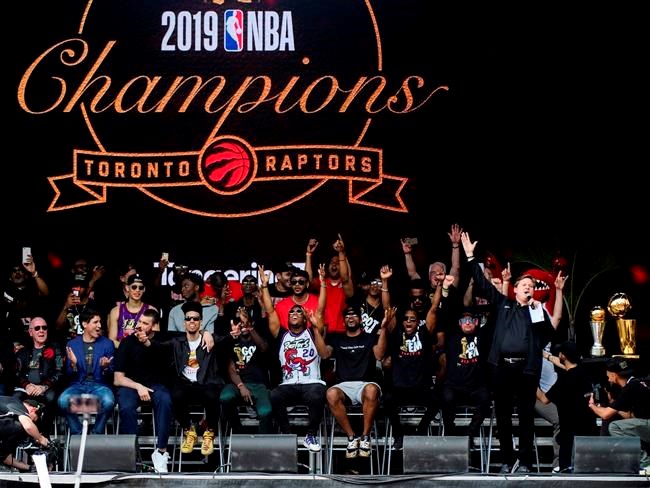 TORONTO — The Toronto Raptors' seasoned play-by-play announcer is winning widespread praise for calming a jittery crowd after gunfire broke out at a jammed Nathan Phillips Square, convincing fans to remain strong and "stay together."

As people at the edges of the crowd fled gunshots in panic, Matt Devlin calmly announced a brief suspension of Raptors' NBA Championship festivities on Monday, promising more information soon and reminding fans they were there to celebrate.

"This is about love, it's about rejoicing," he told an estimated one million people gathered in and around city hall's iconic public square.

Devlin, the Raptors' play-by-play announcer since 2008, was soon credited with preventing panic from spreading.

"Amazing job … taking over the mic and keeping all under control during police response. You my sir settling the crowd saved (many) injuries, great work!" one Toronto police officer tweeted.

The heroics come just weeks after Devlin became a Canadian citizen — he was sworn in at a ceremony May 31, the day after Game 1 of the Finals series between the Raptors and defending champs Golden State Warriors.

As several people hailed him a Canadian hero Monday, Devlin said by phone that he went to the side stage for information after hearing there was an emergency. He then asked Larry Tanenbaum, chairman of Raptors' owner Maple Leaf Sports and Entertainment, if he could make an announcement to keep everyone calm.

Devlin then told the crowd: "We're here to celebrate, which we will. But I just want everybody to just take a moment, please stay strong. There is an emergency that is being dealt with," he said, speaking for about two minutes.

Devlin is used to delivering rapid-fire on-air reactions to live courtside action for TSN and Sportsnet. During the welcome home celebrations, he said he had an earpiece, but largely spoke off-the-cuff.

"I had ... to make sure everybody was calm, because you don't want that to trigger something else. Hopefully I was able to do that in some small way," said the Syracuse, N.Y., native, also known as Matty D.

"I felt like I wanted to keep talking, because the longer that I talked, the calmer people would be. And hopefully that's the case."

Scott Reid, a former senior adviser to prime minister Paul Martin, had praise for the authorities' overall response, and for Devlin in particular.

"The decision to concentrate immediately on quelling the specific risk of a public stampede — and to do it from the stage, interrupting the owner while shrewdly choosing to not mention a shooter. That all took balls. And brains," Reid tweeted.

"Finally, giant props to @Matt_Devlin who, by definition, could not have known what was in motion but had the steel and professionalism to deliver that message, striking just the right balance. With the team, the city and the world watching. Impressive."

The festivities quickly resumed as police continued their investigation and arrested a total of three suspects and seized two firearms.

Jack Rozdilsky, professor of disaster and emergency management at York University, said the dangerous episode was handled well by all.

"Authorities moved in quickly, they made decisive actions, they isolated the area. Somehow information was either relayed up to the stage or on the stage, maybe things were noticed and then the MC knew what to do immediately with public messaging."

Anytime such threats emerge, he says the goal by authorities is to minimize chaos and injury.

Unfortunately, we're now in an era where such tragedies are becoming increasingly common in large cities such as Toronto, he added.

Devlin says he remained focused on making sure "the situation would not grow."

Many TV viewers were unaware of the drama as local cameras remained focused on the stage while rumours emerged online of a possible shooting, with some people sharing cellphone footage of panicked fans fleeing the area.

Bell Media spokesman Scott Henderson said in a statement that the media giant's flagship channel CTV followed the lead of what was happening on stage with information available at the time. He said the shooting was addressed later in CTV's broadcast after police confirmed details, while Bell's local all-news channel CP24 later provided continuous coverage of the incident.

Hockey PEI warns of season suspensions for players for online trash talk
Jan 24, 2020 7:58 AM
Montreal Alouettes re-sign offensive linemen Kristian Matt, Sean Jamieson
Jan 24, 2020 7:57 AM
Comments
We welcome your feedback and encourage you to share your thoughts on this story. We ask that you be respectful of others and their points of view, refrain from personal attacks and stay on topic. To learn about our commenting policies and how we moderate, please read our Community Guidelines.