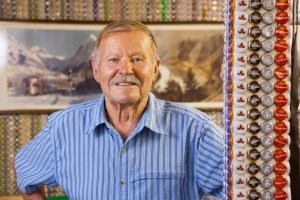 Norman was born in Waldeck, Sask. where he lived with his family, including eight siblings, before moving to Penticton in 1943. He passed away peacefully at the age of 91 at his home in Kamloops.

Norman started working for CP Railway in 1944, later holding jobs in Revelstoke and Kamloops, retiring in 1983. He formed lifelong friendships with his workmates. After retiring, he continued to actively participate in yearly gatherings. He also served as president of the CP Pensioners Kamloops Chapter for 17 years until the day of his passing.

His upbringing on a farm in Saskatchewan was reflected in his love of gardening and the outdoors. Norman had many interests and special talents for fixing everything from clocks to cars. He loved his home, his garden and particularly his workshop where he regularly gathered with his many friends, neighbours and family, always greeting everyone with a cheerful disposition, an afternoon beer, conversation and endless stories.

A special thanks to Dr. Kraig Montalbetti for the years of caring support, and to the Palliative Home Care team for their outstanding care and attention.

A celebration of life will take place on Sept. 29 at the Desert Gardens Seniors Centre, 540 Seymour Street, Kamloops, from 1-4 p.m. Drop in and share your stories and memories.